The team marks its 100th season with a record-breaking season.

Jared Harrell cuts through the defense for another long gain against Idaho, Sept. 22, 2018. (Gregory Urquiaga/UC Davis)

In 1915, World War I had been going for a year. President Woodrow Wilson established the Rocky Mountain National Park. Babe Ruth played for the Boston Red Sox, which won the World Series that year.

UC Berkeley enjoyed some American football in its early days, and its team dates back to 1886. However, rugby became favored at the turn of the 20th century, as football increasingly was seen as brutal and dangerous. In fact, many high schools, colleges and universities across the country dropped American football in favor of rugby for short periods during this time. (These included UC Berkeley, University of Southern California and Stanford University.)

President Theodore Roosevelt even got involved, convening influential figures from college football and urging radical rule changes and new regulations. Schools that had placed their programs on hiatus eventually brought back the sport.

That first year of football at UC Davis, then the University Farm, 18 men from a student body of 296 reported to the team. One was Colby E. “Babe” Slater ’17, who went on to become the first alumnus to win Olympic gold — for rugby. And despite a few years off due to war, UC Davis has played the game ever since.

The Aggies took the field, facing St. Mary’s for its first game. They lost. It wasn’t until 1929 that the team took its first conference crown. 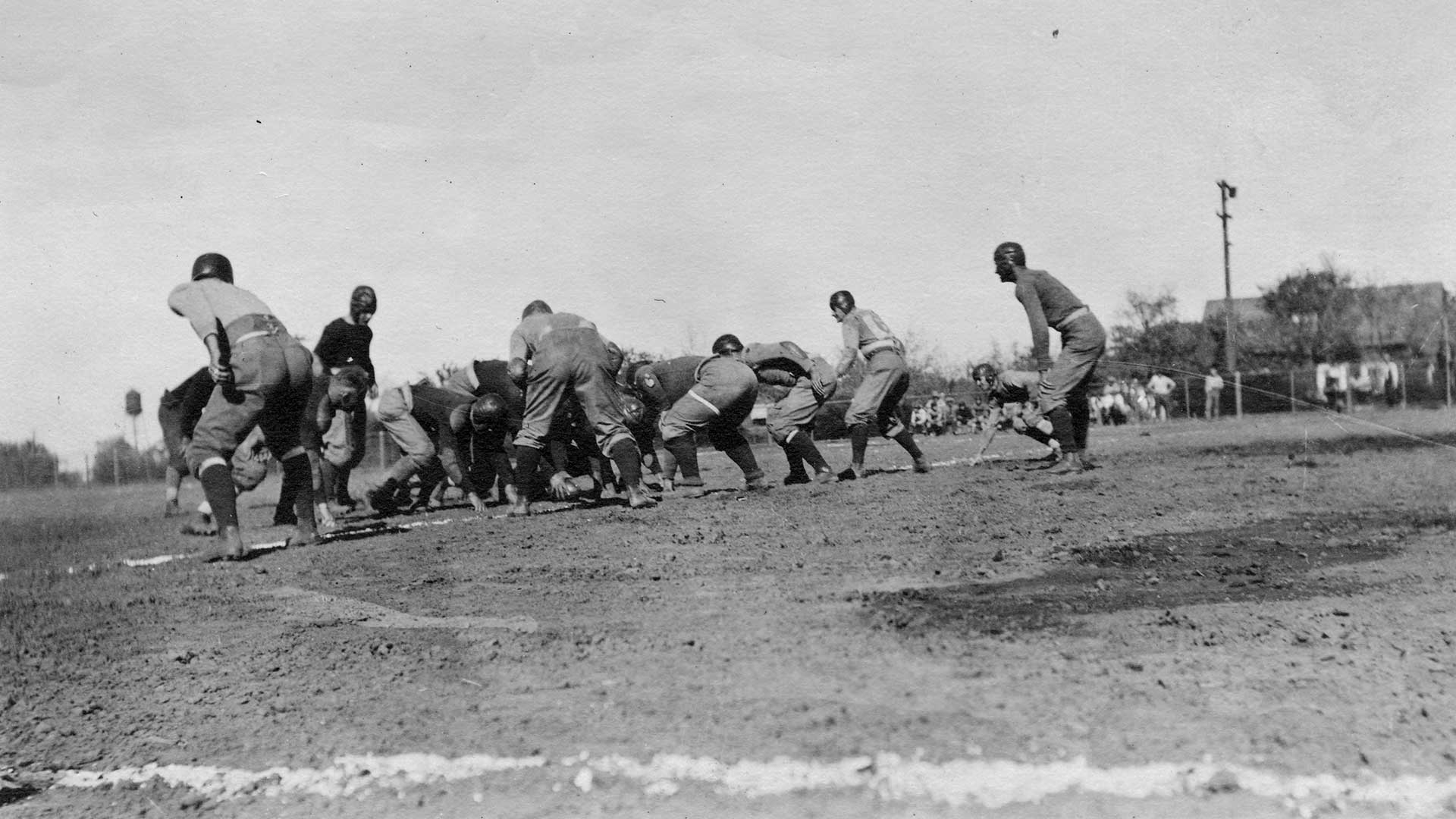 Everett Ben Robinson played right tackle for that team and told the Woodland Daily Democrat in 1986 about playing the game back when helmets were made of leather. I.F. “Crip” Toomey coached that first championship team.

“We were just a small group of guys who wanted to play football,” Robinson said in 1986. He was an inaugural inductee to the Cal Aggie Athletics Hall of Fame in 1980. He died in 1994. 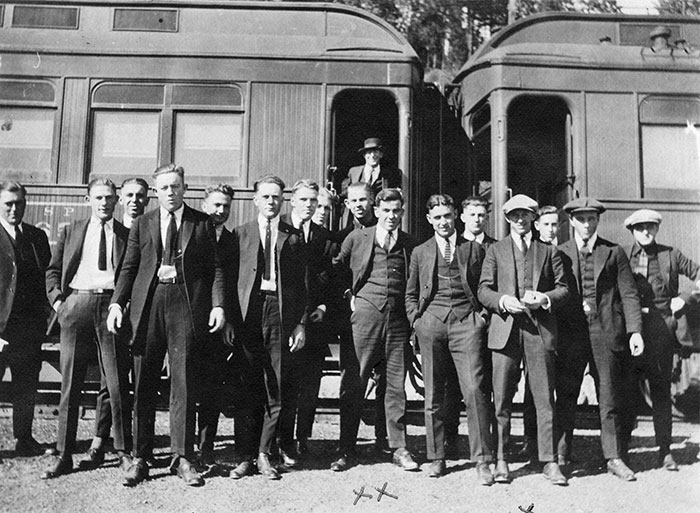 UC Davis football team pictured at a stop in Truckee en route to a game in Reno, circa 1921. (UC Davis Special Collections)

Toomey Field opened in 1949 as the home of UC Davis football. Originally named Aggie Field, it was renamed for the coach in 1962. The venue became known affectionately as “The Toom” or “The Tomb,” reportedly because the team “buried” so many opponents there. 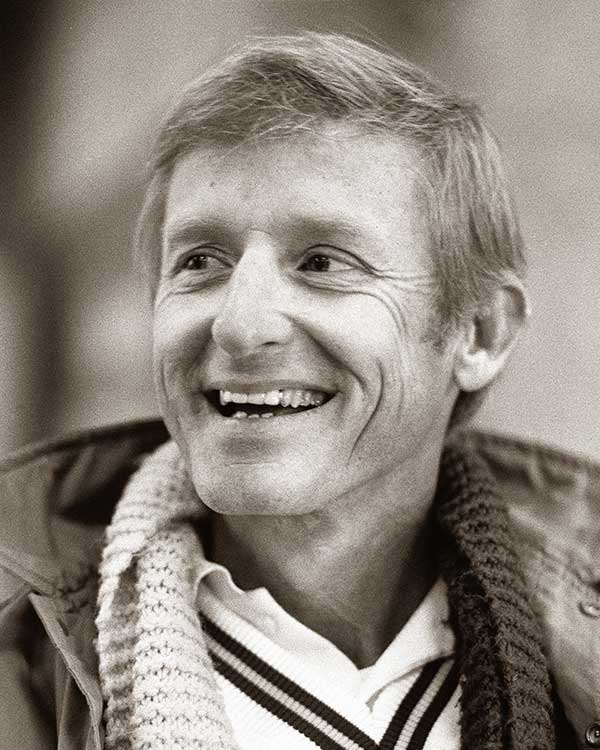 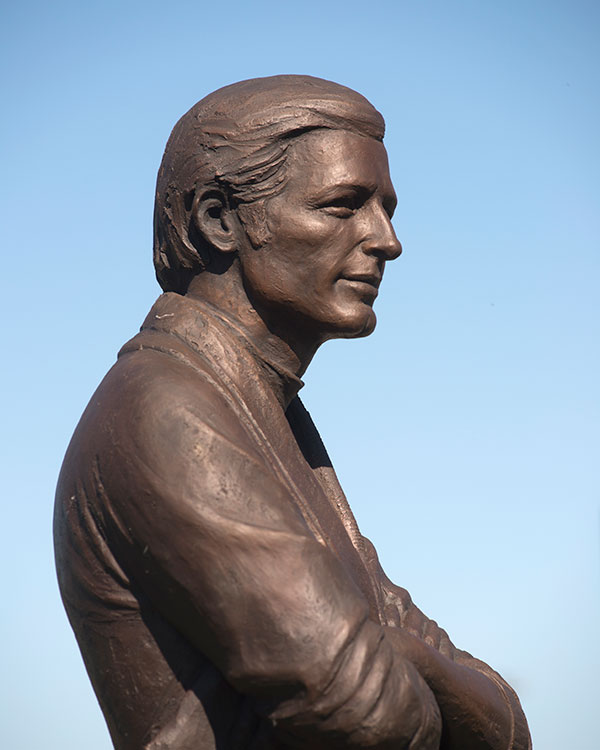 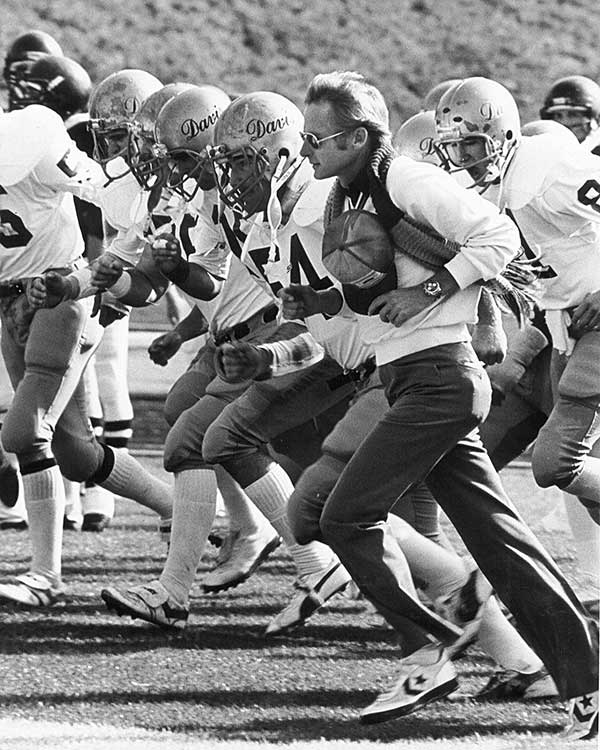 Coach Jim Sochor’s legacy is more than a win-loss record: It’s one of trust, unity and togetherness. Those words are inscribed on the bronze statue honoring him at Aggie Stadium (where the field is also named in his honor). The statue — designed by artist Lisa Reinertson, who also sculpted the Martin Luther King, Jr., statue at the UC Davis School of Law — was unveiled by Dylan Johnson, the grandson of Jim Sochor in November 2016. 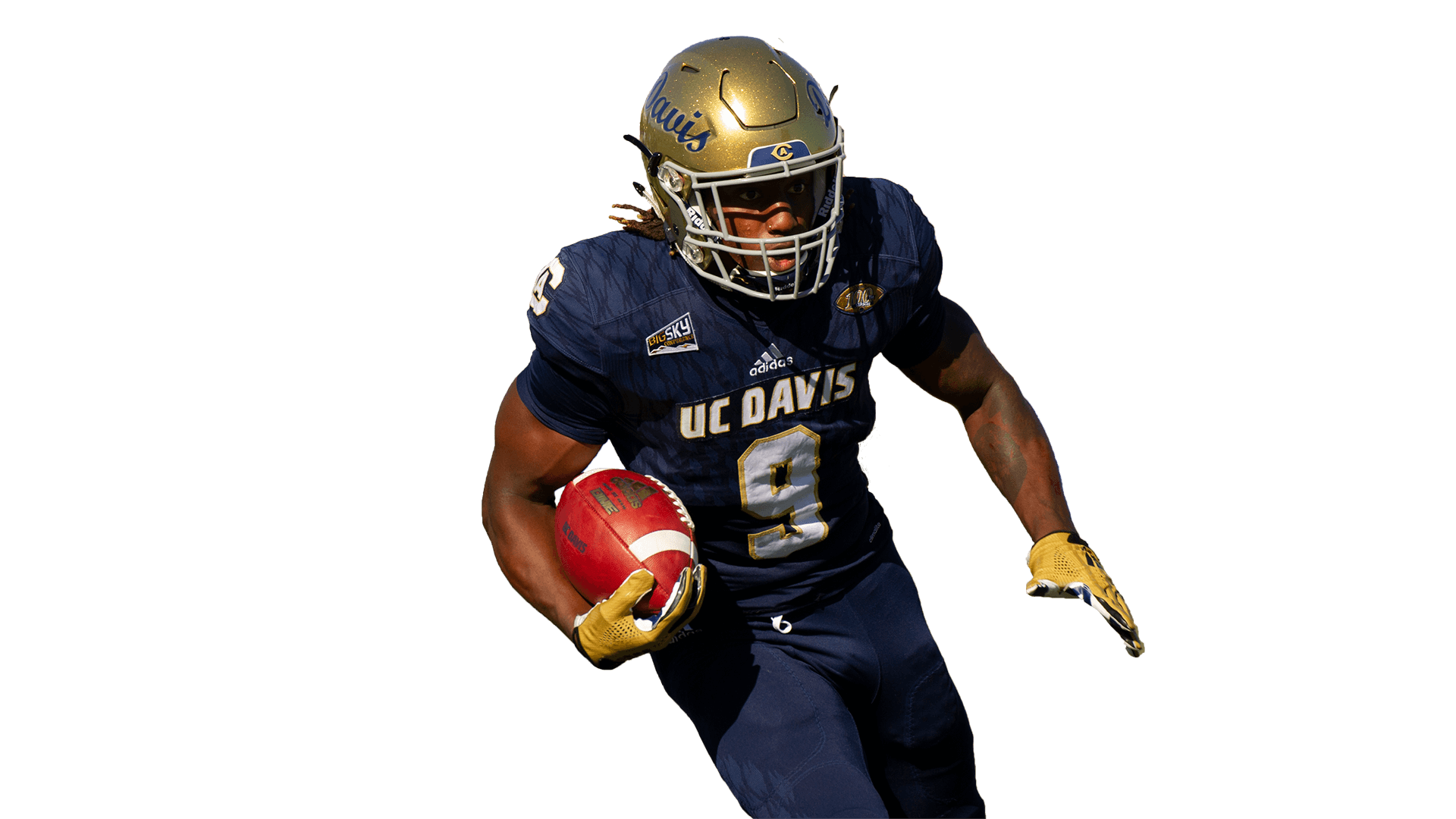 Khris Vaughn runs through the defense for a long run during UC Davis and Idaho football game on Sept. 22, 2018. (Gregory Urquiaga/UC Davis)

In 1970, UC Davis promoted an assistant named Jim Sochor to the position of head football coach.

Sochor, with his easy-going and unassuming manner, became known for his people-oriented approach. He had a Ph.D. in education from the University of Utah. On top of excellent leadership skills and good strategies and staff, Sochor nurtured his student-athletes, encouraging academic achievements as well as success on the field.

“He was unlike any football coach that I ever knew,” said Lou Bronzan ’75, Cred. ’76, a linebacker for the team, who went on to be the defensive coordinator for 20 years. “When you look at the famous winning coaches — they are rough and tough, blood and guts. He was very reserved. He didn’t raise his voice.”

His methods yielded results. The team won 18 straight Division II championships during his tenure as coach. The Davis Enterprise once quoted Bud Van Deren, Humboldt State coach from 1966 to 1985, as saying, “As long as Davis is in the league, the rest of us are all playing for second place.”

As a Division II team, the Aggies played in a non-scholarship conference. When other players were recruited with full rides, those on the UC Davis team were lured by a tradition of high achievement.

“At Davis, we had a lot to overcome,” said Sochor, who died in 2015. “We didn’t have scholarships or spring practice. We had to win on preparation, trust, togetherness and unity.” His goal was to ensure that “no one would become as close as a football team as we did … we bonded and developed a chemistry that endured.”

Bob Foster ’64, Cred. ’65, M.A. ’74, took up the mantle after Sochor became athletic director. The Aggies never had a losing season while Foster was on staff. 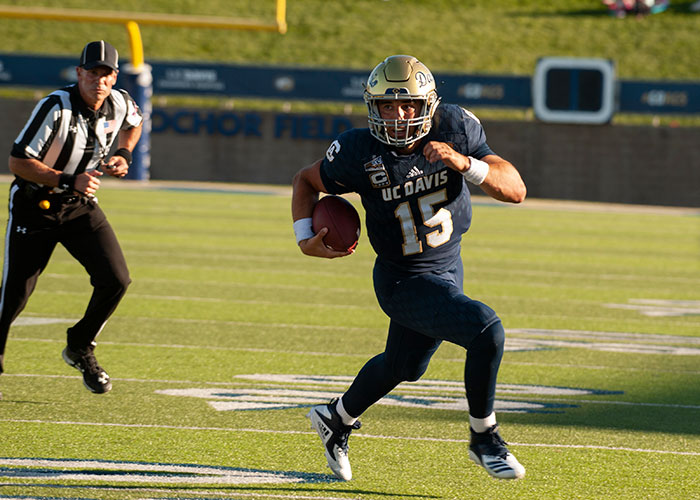 In 2005, the Aggies were in transition to Division I and got the chance to play Stanford. Their win at 20-17 marked one of the biggest upsets in Aggie history. UC Davis had not played Stanford, a Pac-10 team, since 1932, when the team lost 59-0.

Aggie coach Bob Biggs ’73 — a former quarterback for the team — said at the time, “The stars all lined up right.”

As the university considered a new stadium as far back as the 1980s, talk of Division I was given little weight. The team with no scholarships had a steady winning streak and solid reputation. Players had gone on to join the NFL and coach for top-tier teams.

Still, some of the Aggies’ regular rivals discontinued their football programs in the 1990s, including UC Santa Barbara, Long Beach State, University of the Pacific and Chico State. Joining Division I meant competing on a larger stage, increased support and enhanced scholarships.

It marked the end of an era and the start of another exciting period for football at UC Davis.

“We knew who we were, and we were proud of it,” said Bronzan, who is now the assistant director of the Department of Physical Education at UC Davis.

Aggie Football Over the Years

1915
Football team plays its first official game.
1925
The Aggies join the Far Western Conference, its first official league.
1949
Toomey Field opens and is home to UC Davis football for the next 57 years.
1970
Jim Sochor becomes head coach.
1982
Appeared in NCAA Division II National Championship game.
1989
Jim Sochor promoted to athletic director. Bob Foster ’64, Cred. ’65, M.A. ’74, becomes head coach.
1993
Bob Biggs ’73 becomes head coach.
2003
The team competes in Division II for this season, before starting a transition to Division I.
2005
UC Davis wins against Stanford, marking the Aggies’ first win over a Division I-A team since 1986.
2007
Aggie Stadium opens, field is named for Sochor.
Team promoted to Division I.
2012
Bob Biggs retires as head coach at the end of the season, capping his career with a 34-27 home victory against Sacramento State. The Aggies join the Big Sky Conference prior to the start of the season.
2016
Current head coach Dan Hawkins ’84 takes the job.
2018
Homecoming game becomes instant classic with UC Davis winning in overtime. First time in program history that Aggies held top 10 rankings in both STATS FCS and AFCA Coaches’ national polls, rising all the way to No. 4. 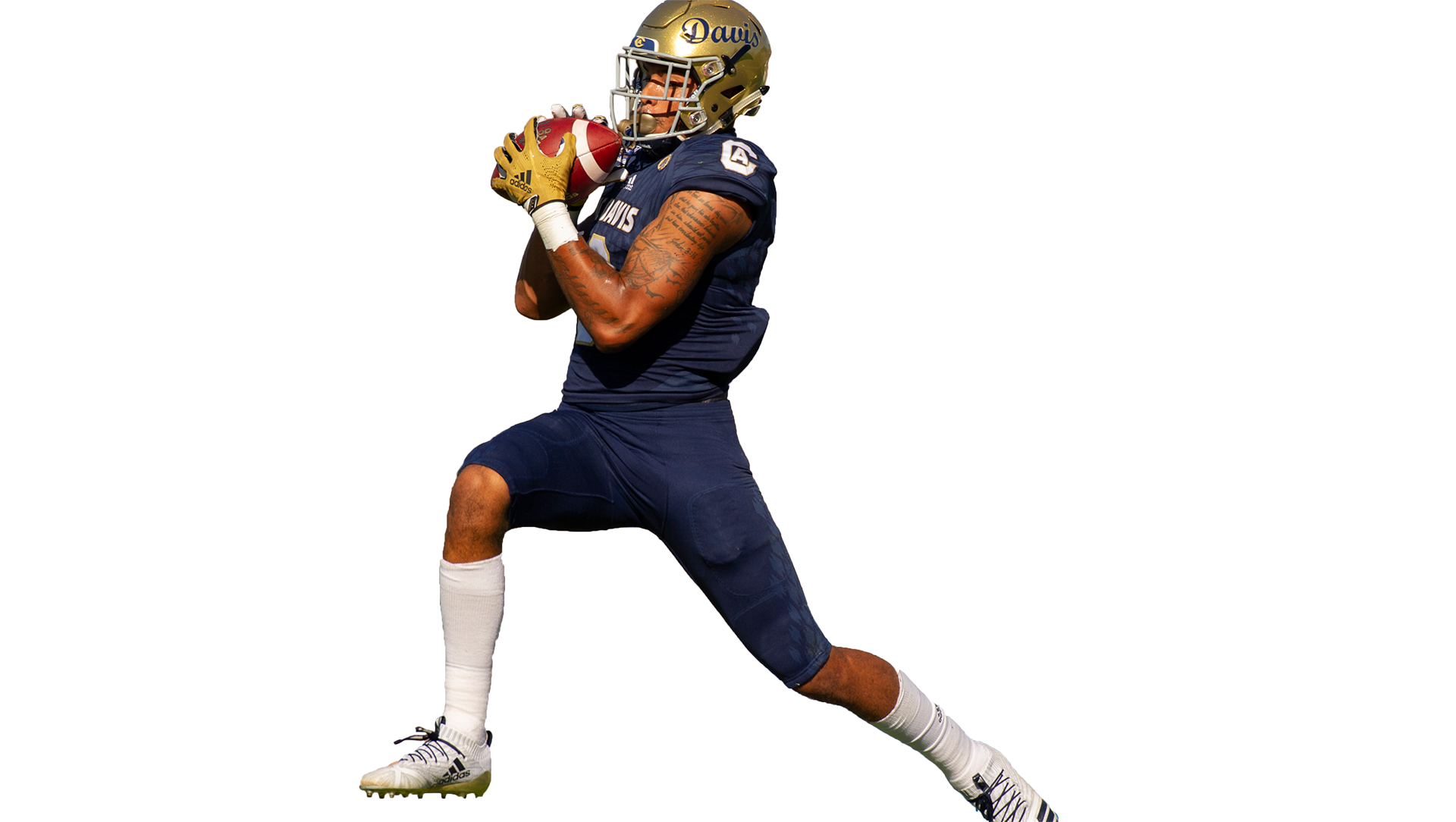 The Division I Years

The transition to NCAA Division I took four years, culminating in the opening of Aggie Stadium in 2007. It boasts seating for about 10,000. The field is named for Jim Sochor.

He spoke positively to the UC Davis Magazine about returning to his alma mater. “I think my purpose has always been trying to make a positive difference,” he said in 2017. “I really felt like coming here would be an opportunity to help my university and my football program and give back to the place that gave back to me.” 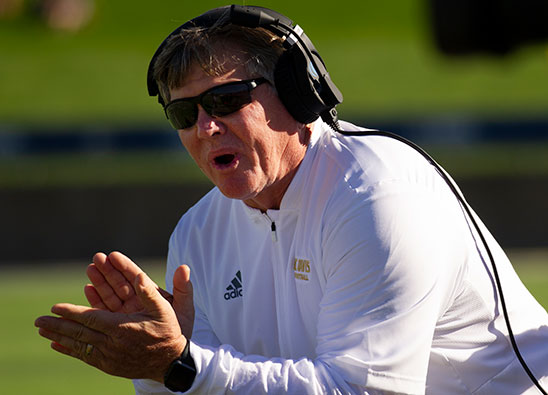 Coach Dan Hawkins on the sidelines at this year’s game vs. Idaho. (Gregory Urquiaga/UC Davis)

Bruce Gallaudet, who covered the team for The Davis Enterprise for 39 years before stepping down as sports editor this year, described Coach Hawkins’ arrival as reinvigorating the Aggie fanbase.

“Aggie pride never went anywhere,” he said. “It just took a little nap for a while.”

“Hawk demands more, so we expect more from ourselves,” said Reese, adding that though summer practices are optional for football players, every player on the squad showed up this past summer.

Nas Anesi, a junior linebacker, further testified to Hawkins’ ability to motivate his players. “He tells us, ‘It’s about us, not the other team,’ every single week, so we focus on being the best team we can be and the best person to contribute to our team,” Anesi said.

The hard work of Hawkins, his staff and his players has paid off, with this season breaking the Aggies’ eight-year streak of losing seasons. The team is so far 6-1 in Big Sky play and first in its conference, boasting an 8-2 record and bright playoff prospects.

This year’s Homecoming game also became an instant classic, with freshman running back Ulonzo Gilliam scoring the winning touchdown against Idaho State in overtime, to the delight of a packed Aggie Stadium.

The Aggie football team’s rapid ascent this season is not a fluke. The Davis roster boasts three talented captains in senior wide receiver Keelan Doss, junior quarterback Jake Maier and Anesi, who finished last season with the most tackles of any underclassman. Additionally, Reese led the 2017 team with nine touchdowns, and has seven this year. Gilliam has 13 touchdowns this year and has already shown himself to be a player to watch.

The Davis recruiting class for the 2019 season is now ranked number 13, indicating continued upward trajectory for the team.

“The legacy of football, of Davis, is that it’s football done the right way: with pride and enthusiasm,” said Gallaudet. “And I think it’s now in a new era.”

Update: The Aggies won their first game in the FCS playoffs on Dec. 1, defeating University of Northern Iowa, 23-16. They fell to Eastern Washington University, 34-29, on Dec. 8. Coach Dan Hawkins was named co-coach of the year by the Big Sky Conference, voted upon by the league’s coaches.