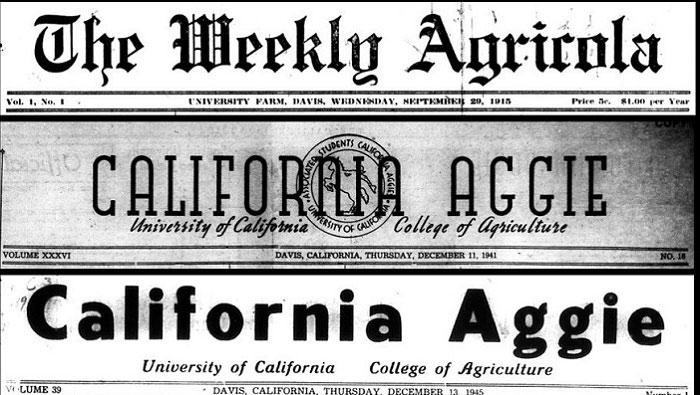 This spring, The California Aggie became the first undergraduate UC newspaper to digitize its full print collection and make it searchable online. The Aggie archive, which goes all the way back to its first issue in 1915, when UC Davis was still the University Farm and its newspaper was known as The Weekly Agricola, makes campus and local history easily accessible. Fundraising — including efforts among Aggie alumni — helped support the project.

The 5,410 digitized issues of The Aggie are now available to search, view, print or download from the California Digital Newspaper Collection, a database of more than a million historical California newspapers managed by UC Riverside’s Center for Bibliographical Studies and Research.

The project started four years ago, when then Aggie editor-in-chief Scott Dresser approached Kevin Miller, the university archivist and head of Archives and Special Collections at the UC Davis Library, with the idea of digitizing the microfilm archives of The Aggie.

“I thought that these archives should be accessible to everyone,” Dresser recently told The Aggie. “I think The Aggie is the most comprehensive piece of historical literature that exists for the university and the city of Davis.”

From microfilm to online archive

While both the library and The Aggie had collected back issues of the newspaper, neither collection was easy to access and search. Finding an old article or photograph meant paging through bound copies (The Aggie had a set in its former offices in the basement of Freeborn Hall, while the library’s was stored in an off-site facility for preservation), or viewing the library’s copies on microfilm, a reel of film that stores miniature photographic copies of printed materials.

“It’s really only a dedicated researcher and an exceptionally dedicated undergraduate student who’s going to take the time to come to our reading room and order the bound copy ahead of time or go down to the lower level and figure out how to use the microfilm reader,” said Miller.

The goal of the digital archive was, in Miller’s words, to enable anyone interested in UC Davis’ past to “really experience The Aggie in its full historical run” — making it easy to find, search and read each article, advertisement, photo and caption.

Originally, the library and The Aggie had planned to digitize the microfilm archive, but quickly determined that the original print was the best source because many of the photographs on the microfilm were blurry and smudged.

Miller explained, “We wanted to do it once and do it right.”

Then another concern arose: Because the library’s print copies were bound, the originals would be damaged if they were to be scanned completely through to the margins.

Fortunately, The Aggie, too, had a large inventory of copies from previous years in its offices, which were then located in Freeborn Hall. By digitizing copies provided by The Aggie instead, the library was able to preserve the integrity of its archival print collection.

The copies were sent to Backstage Library Works, which is headquartered in Provo, Utah, to be scanned, digitized and labeled for their metadata. In early 2019, after several months of work, the scanning was completed. The materials then made their way to UC Riverside, where the Center for Bibliographical Studies and Research is based. 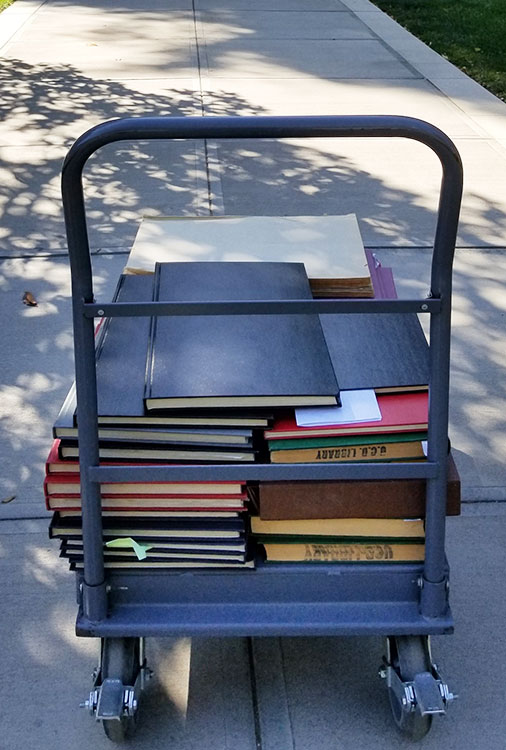 Print and online: The best of both worlds

With the archive now online, students, staff and scholars can now experience more than a century of UC Davis and local history through an interface that allows users to search by keyword, date, content type and word count.

But it’s not just the articles that hold historical significance. Laurie Pederson, the business and advertising manager for The Aggie, who has worked with each of the newspaper’s editors throughout the project, notes that there is also value in seeing the layout and design choices editors have made throughout the years — which stories were on the front page, how headlines were treated, what photographs accompanied each one. 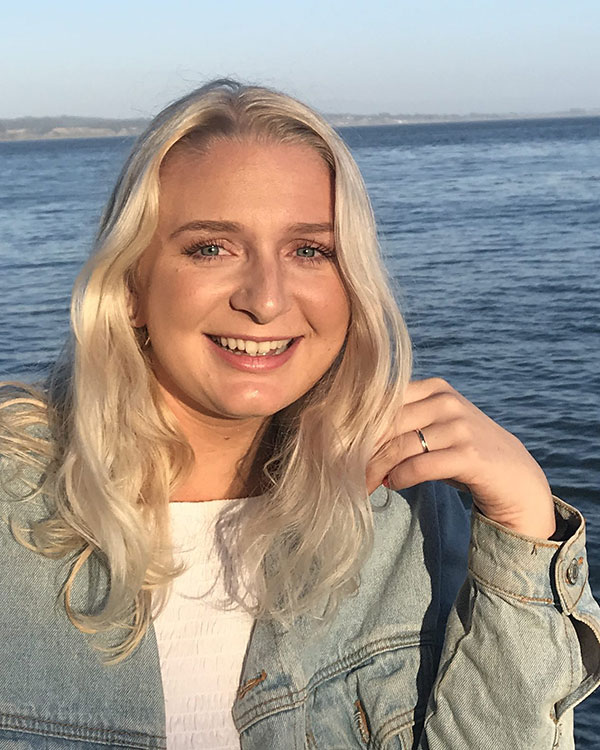 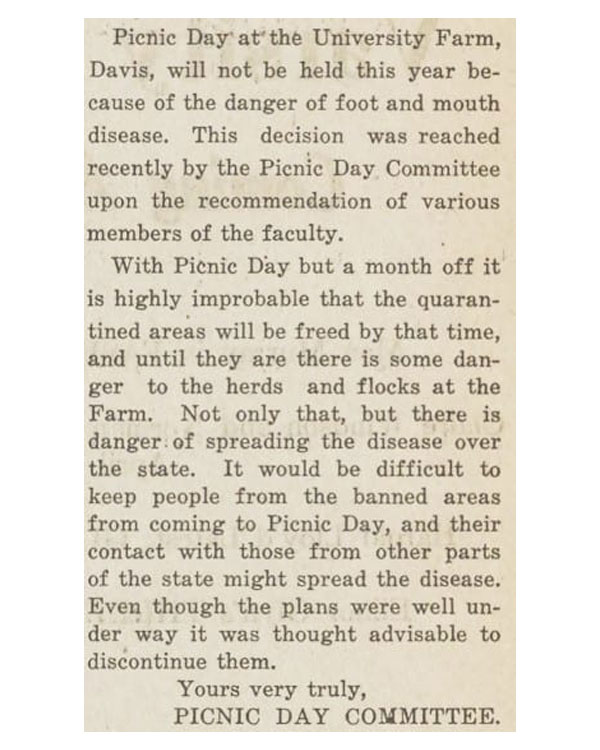 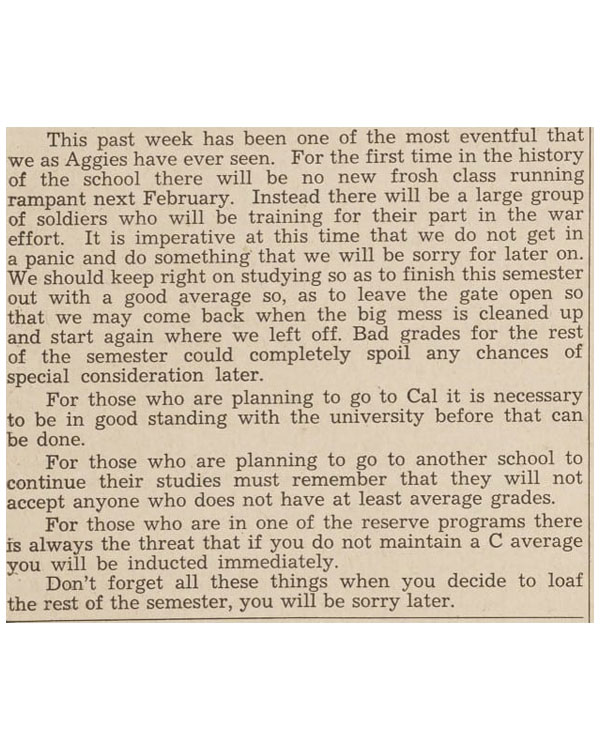 Aggies are Resilient, Always Have Been

As I sit in my apartment, poring over photos and newspaper clippings of past Picnic Days in the library’s new online archive of The Aggie, I can’t help but reflect on last spring. As a transfer student, I experienced my first Picnic Day. I remember the excitement, the warm weather, and the sense of community and fun. This year I am a graduating senior, and like many, I was looking forward to a term full of celebration.

The cancellation of in-person classes and continuation of education online feels like unprecedented territory — and in many ways, it is. Professors, students, and administrators have had to adapt to a new way of education with little notice. As a campus, we have also had to deal with the devastation and disappointment of the cancellation of our most anticipated events and ceremonies.

But after digging through the recently digitized archives of The California Aggie, I’ve discovered that UC Davis is no stranger to adapting to new circumstances.

Did you know Picnic Day has been canceled once before because of an epidemic? But it wasn’t people getting sick that time: It was livestock that the University Farm was concerned about in 1924.

In 1942 a student writing in The Aggie reflects: “This past week has been one of the most eventful that we as Aggies have ever seen.” A sentence that could have easily been written last month, as school closures swept the country due to COVID-19.

UC Davis was closed from 1943 to 1945 due to World War II. During this time, campus was known as Camp Kohler and the Arboretum was used to simulate combat and explosives. Many students were forced to transfer schools to continue their education, while others enlisted in the military themselves.

The Aggie archive, which dates back to the very first issue of The Weekly Agricola in 1915, has shed light on the historic events Aggies have been a part of. As a community, we collectively share the disappointment of a virtual Spring quarter, but we can come together knowing that, now, as always, Aggies are resilient.

“Every page is a veritable time capsule, and seeing all the pages in a chronological format that is searchable provides a complete depiction of the times,” Pederson said. “Unlike just the stories themselves, which only shot a snapshot of information, every page and it’s style, format, content and design truly show the changing times.”

In a companion project to the main digitization effort, Miller also worked with last year’s editor-in-chief, Emily Stack, to bring The Aggie’s photo morgue — the photographs and negatives that the paper had produced through the years — over to the library’s University Archives. Next month, the library will launch a virtual exhibit on its website featuring impressive examples of student photojournalism from the Aggie photo archive.