Richard Nelson, the founding chair of the UC Davis Department of Art, recruited artists in the 1960s to create a faculty that included Wayne Thiebaud, William T. Wiley, Robert Arneson, Manuel Neri and others whose work now is displayed in museums worldwide. Their work continues, through art faculty members and students. Here, we feature three female artists who studied at UC Davis over two decades — their media are performance art, sculpture and ceramics.

Angela Willetts was working on her M.F.A. at UC Davis a few years ago when Annabeth Rosen, a ceramicist and Robert Arneson chair of art and art history, walked into her studio. “She said, ‘you are really good at making things look pretty.’’’

There is always the but. She also urged Willetts to work on something challenging. Willetts took her advice to heart, figuring out where she should go next. It was not comfortable at first, she admitted.

Raised and educated in England, Willetts was more accustomed to a regimented learning style. She studied economics, English and history in high school. But she always wanted to be an artist. Her previous education was completely unlike the free-flowing work atmosphere in UC Davis studios.

“I was trying to think my way through the art,” she remembered. “That wasn’t working.” 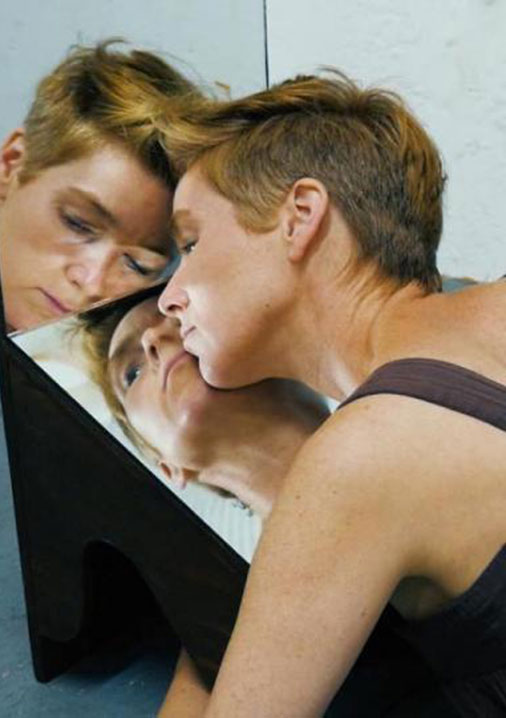 Angela Willetts with her “Slant Step.”

“I got this idea to work with dough,” she said, planning to sculpt with it. She soon found the movement of the salt dough was more interesting than the material itself. It kept changing. (She also heard Rosen’s voice in the back of her head saying, “you are not listening to the materials.”) So she grabbed a video camera and recorded herself working with the bread dough to see how it moved.

Now, she uses her body to explore her materials, recording herself working with objects and the video becomes the exhibited work.

Performance art never would have occurred to her, before her time at Davis. She didn’t even like it, she said. And she didn’t know of Bruce Nauman, a noteworthy performance art graduate of UC Davis. She wasn’t familiar with contemporary art.

“Now, my work almost always comes from physical interaction, and I use my body to explore the material.”

Sometimes that means tumbling with a slant step, an iconic art piece from UC Davis that she re-invented with mirrors and plywood for a recent Sacramento exhibition; or acting out a scene in Guatemalan ruins wearing cheap plastic kitchen utensils she bought at a local market. Her work often contains subtle political commentary. Willetts’ video in the Guatemalan ruins that she shot while on a fellowship there, for example, pokes at issues with colonization and its effects on people.

She teaches art at middle and high schools in the Bay Area to support her 5-year-old son and herself while exhibiting her work all over the world. She also worked at the Jan Shrem and Maria Manetti Shrem Museum of Art, shortly after getting her M.F.A., planning education programs and developing the drop-in studio programs that have become a popular tradition at the UC Davis museum. She credits her time at UC Davis with launching her career.

“Every single professor was my friend, and they were great cheerleaders, while still giving a lot of critical feedback,” she said. “They inspired me, as an artist, to find the art voice in my head.”

Elisabeth Higgins O’Connor had been pursuing her master’s degree in fine arts at Cal State Long Beach when her ceramicist husband got a job at a Sacramento region community college. She met with Rosen, and was convinced she could find a new M.F.A. home at UC Davis working in studios at TB 9. She found that and more, and continues to teach undergraduate art there while living and working in her studio in the Oak Park neighborhood of Sacramento.

She was working in clay back then, and the first objects she made at TB 9 were rats. “We had a rat problem, and they were everywhere. They kept eating my sandwich. So I just made some out of clay,” she laughed. She reflected on her beginning days at UC Davis while taking a break from teaching an undergraduate sculpture class.

It was an open space, with good light, a 24/7 working environment and minimal distractions, she said. She lived in town then, and could walk or ride her bike back and forth to her studio whenever she wanted, to finish projects, apply glaze or fire clay. 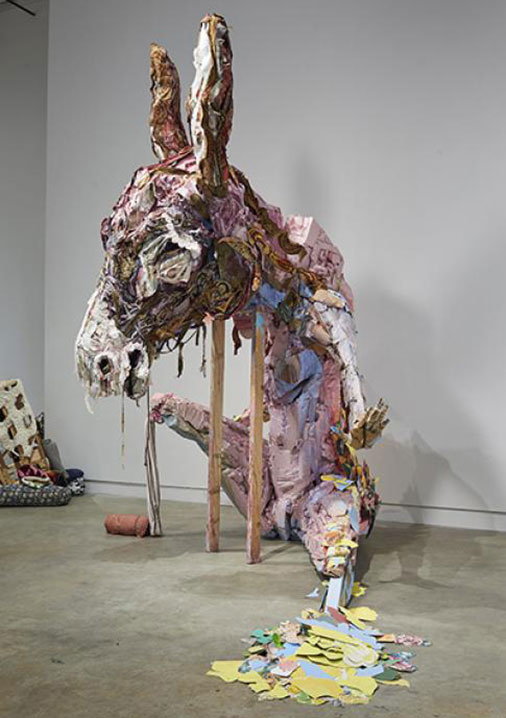 Her work evolved, and she moved into sculptures made from found objects, art for which she is well known today. That later work, which has been exhibited throughout the United States and Canada, shows almost mythological characters in bright colors that are giant — 6-foot-tall coyotes and 11-foot-tall mules and cattle.

The creatures are made from trash and thrift store discards. Old crocheted afghans, quilt pins, rope, pillows and bedclothes, sometimes dipped in liquid clay, or slip, to stiffen them, make their way into her sculptures. She scavenges reject paint from big box stores to top it all off.

She also uses Styrofoam as a primary, base material to craft the huge objects, making her work lighter than a lot of sculpture, and easier to move, she added.

“And I feel good that I’m using it. It just goes to waste, otherwise,” she said of the Styrofoam that she often finds near large community trash bins. The stunned donkeys and sweet cows are often described as “scruffy.” The found objects of her construction poke out from bellies and hooves in a final product that is a far cry from her once smooth clay.

A recent exhibition at the Charlie James Gallery in Los Angeles described her work as “Existing somewhere on a spectrum between elegy and absurdity, the work examines a setting where cautionary tales, private anxieties and natural history museum dioramas mash-up … and attempts to close the gap between tenderness and the grotesque. Through a feminist lens, O’Connor’s sculptures appear as something like a Where The Wild Things Are from a feminist imagination.”

Higgins-O’Connor added this to the description of her work: “It is a way to convey my engagement in formal concerns, process, materiality and the marks and decisions left by my hand.” And, she said, “Everyone can identify with animals in some way.”

Fitting, then, that her work is featured in a current exhibition, “Encounters: Honoring the Animal in Ourselves,” running through the end of the year at the Palo Alto Art Center.

On a recent afternoon in the TB 9 classroom of beginning students, she was both counseling beginning sculptors and admiring their work — and telling a student who wasn’t feeling well to get some rest.

“It’s very energizing to work with students,” she explained. “It’s so exciting to see them create — some of them for the first time. And then I get very juiced up about my own work.”

Kathy Butterly, one of the last students to work under Arneson, came up in a world with few female sculptors to emulate, she said at a recent talk at the Manetti Shrem Museum. But when she learned of Viola Frey’s work, “I had found my mentor,” she said. 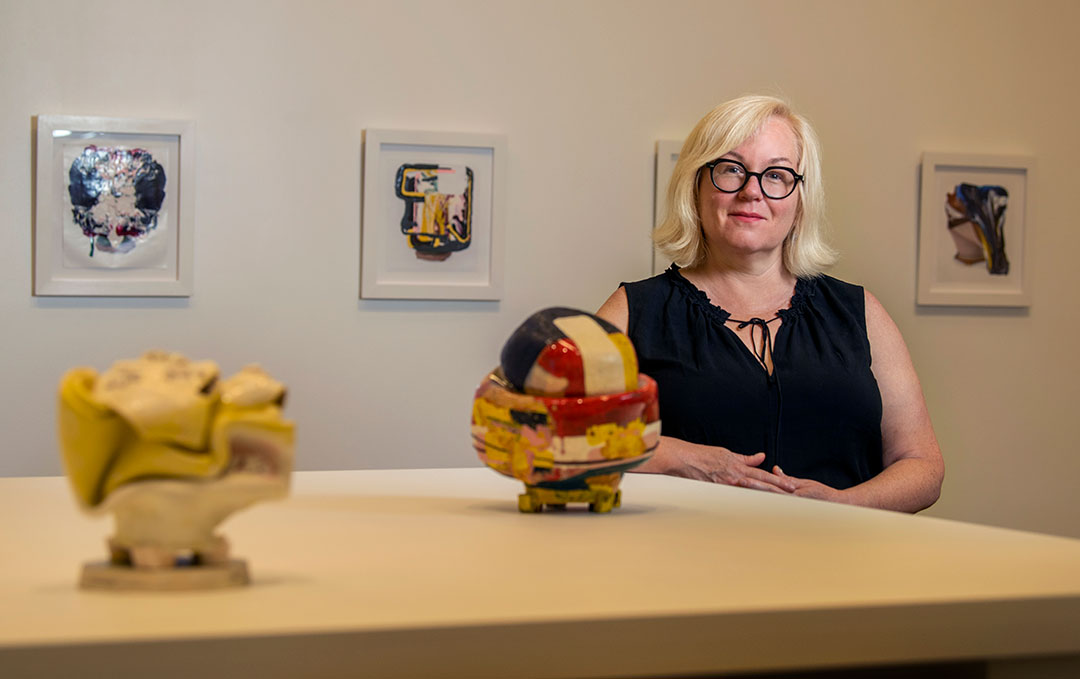 The late Frey, a Lodi native and contemporary of Arneson and other artists of the California Funk movement, is known for enormous sculptures of people created in parts. Butterly, however, creates in a comparatively miniature world, creating confident bright orange, yellow and red clay works cured under extreme heat that are a few inches high.

Displayed in “Kathy Butterly/ColorForm” at the Manetti Shrem Museum through Dec. 29, the ceramics in her first retrospective fill galleries backed by bright yellow walls that make everything pop. Most have political meaning — a result of creating most work while listening to public radio, she said, just like her mentor Arneson.

The Washington Post recently described her work this way: “Some sport wonky handles, bright little pompoms that have the texture of spongy coral, and garlands of tiny beads. They look squashed, squeezed, crumpled and pinched. But — against considerable odds — they cohere. Their colors, riotously combined, have nothing to do with ‘good taste’ yet manage to attain levels of gorgeousness rarely encountered in any medium.” 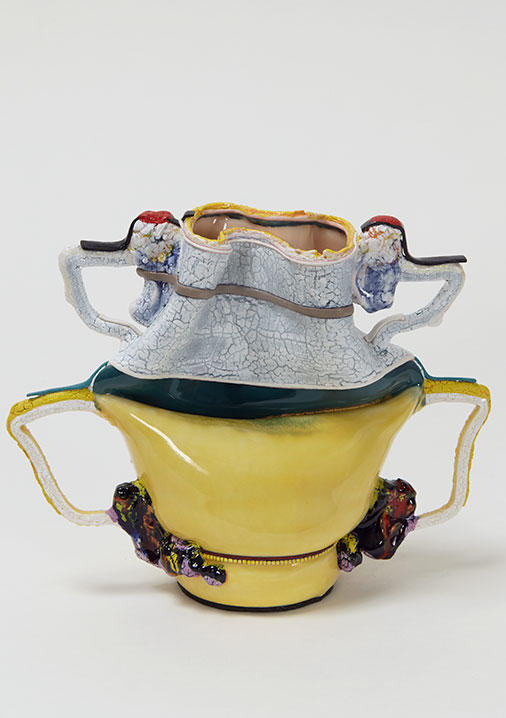 Butterly works in her New York studio on many pieces at a time, as many as 12 sculptures a year. All along, with each piece, she experiments with color, materials, firing sometimes multiple times to get the look she wants. The painting of each piece is as important as the sculpture.

And when she looks at others’ art in a museum, the materials get her attention.

“How is that brushstroke so expressive?” she asked. “I’m thinking about the weight of the color.”

And, she has a material she uses all the time that was left behind by her daughter one day: nail polish. It’s become a staple.

“I kind of feel that I’m become the master of nail polish,” she said, of one of her many ways of working with color and layers. She said that with glazes, they all fire differently, and you don’t always know what you’ll get. “With nail polish, you see it happen. It’s fun and immediate.”