Fatumo Latito sits on a narrow, hand-carved, wooden bench inside her tiny hut fashioned from branches and a mixture of cow dung and mud. It’s pouring outside, but she hasn’t forgotten the last drought.

“Everyone lost livestock. If your herd was big, then you lost maybe half of them. If you only had a little, then you lost everything. I had four cows, and I lost them all,” she said through a translator.

Latito is a member of the Samburu tribe in northern Kenya. For centuries, the Samburu people have lived the same way. Most are in areas too arid to grow crops, so they raise livestock. The tribe travels with their herds in search of green pastures. The dry seasons, when they might lose animals, are usually followed by wet seasons, when they can rebuild their stock.

But climate change and, more recently, the coronavirus pandemic, is threatening their livelihoods and way of life. Rainfall has become more erratic and droughts more frequent and intense, leaving the Samburu with little or no way to replenish their herds that are practically their sole source of income. During one severe drought, Fatumo resorted to fetching and selling water and firewood but still struggled to feed her eight children.

UC Davis economists are trying to help the Samburu survive climate change. Michael Carter, an agricultural economist, is studying whether the Samburu people can ride out prolonged droughts by pairing two interventions: a climate insurance program he helped develop using satellite data and a Kenyan nonprofit called the Boma Project that helps women like Fatumo build small businesses as new sources of income. The hope is that combined, the programs will prevent women — who are hardest hit by disasters —from falling so deep into poverty during drought that they have no way to recover.

The results midway through the study hold promise for the Samburu and other impoverished populations around the world that stand to suffer most from climate change. Women enrolled in the insurance program and Boma Project fared better during the 2019 drought. 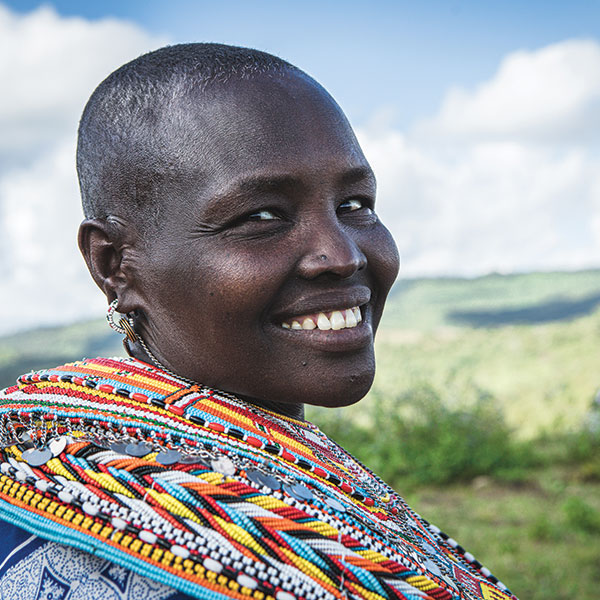 Nkaspan Lentipo has been trading livestock through a business group with the Boma Project. She credits the business with helping to buy medicine for her family. 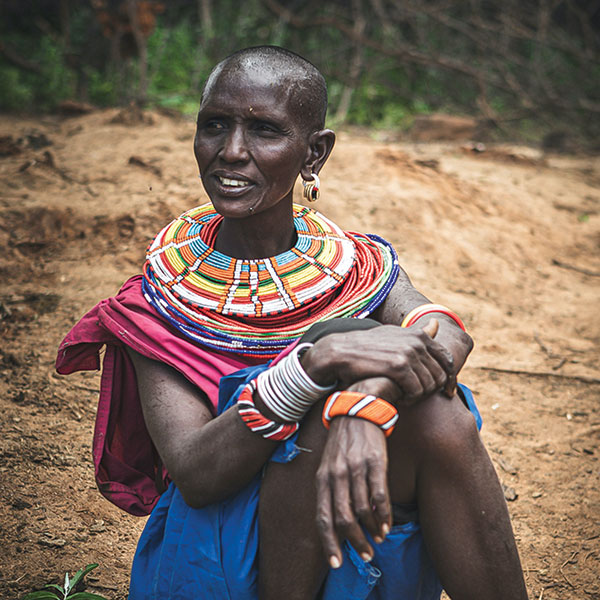 Drought decimated Nonkunta Lekupanae’s livestock. Like other women in her situation, she has turned to menial labor and selling off possessions as a way to earn money.

“As the drought got worse, the women lost some income. But insurance offset that almost shilling for shilling,” said Carter, who directs the UC Davis Feed the Future Innovation Lab for Markets, Risks and Resilience, funded by the U.S. Agency for International Development.

The World Bank estimates that climate change could force 100 million people worldwide into extreme poverty by 2030. The Samburu, who already live on less a dollar a day, exemplify the problem. Four severe droughts have hit the horn of Africa in just the last two decades. With no safety net to protect them when they lose animals, families cut spending on food and can become trapped in poverty for generations, Carter said.

“This makes it hard for children to grow up well-nourished,” he said. “If they have the opportunity to go to school, it’s hard for them to learn. It’s a recurring cycle of poor parents and poor children.”

The Samburu have a strict patriarchal culture. Only the men travel with the herds and make decisions. They commonly have more than one wife. Income usually is not distributed equally among them.

Women like Nonkunta Lekupanae are left behind in the village with little or no way to earn money or feed their children.

Lekupanae spoke under an acacia tree in a large area fenced in by brush, called a “boma.” Goats, sheep and other livestock roam inside. It also holds a few small huts where families live. It’s reachable only on foot and several dozen miles away from the nearest village. “I had a lot of animals in the past,” she said, “but the drought killed them all, cows, goats and even donkeys. It has made us poor.”

Like other women in her situation, Lekupanae turns to menial labor or sells what little she has during drought.

“We have to collect aloe vera plants or sell our goats. It can cost a third of what I make selling aloe vera to buy one package of maize flour,” Lekupanae said, adding that her seven children have gone without food during drought.

Need for women to build assets

Tom Lenaruti, a field coordinator for the Boma Project, said Samburu women who have lost everything need more than a handout. They need a stable source of income and a way to save for future droughts so they can rebuild what they’ve lost.

The Boma Project gives women money, training and mentoring to start their own small businesses, either buying and selling livestock or setting up kiosks to sell such items as sugar and tea. Three women who trust one another team up to run an enterprise. Their business groups prevent husbands from deciding how income is spent.

“In essence, COVID-19 had the same effect as a drought would for women in the Boma Project.”

For the past year and a half, Nkaspan Lentipo and her business group have been trading livestock. She sits atop a lush green hillside wearing the traditional colorful rings of beads from neck to shoulders. She said before the Boma Project, her children would often go hungry. Now her wealth, which is measured by the number of animals, has expanded.

“I had only three goats and two cows. Now I have 20 goats and seven cows,” Lentipo said. “Our kids go to school. I can buy medicine for my kids, my husband and even the livestock if they are sick.”

Carter said that while the cost of coping with drought “is landing on women’s heads,” the asset-building program shows promise. A year-long, peer-reviewed study in 2013 found the Boma Project increased women’s income by 30 percent, though drought can occur every few years and wipe out all of those assets.

UC Davis researchers want a long-term solution, which is why they’re working with the Boma Project. Carter and his team with the Feed the Future lab are midway through a five-year study investigating whether the Boma program combined with a specific type of insurance will protect these women from losing everything during severe droughts.

Called Index-based Livestock Insurance, the climate protection program pays pastoralists based on the amount of forage available for their animals. Carter and colleagues from Cornell University and the International Livestock Research Institute developed the program, which uses satellite data to measure vegetative growth.

Research demonstrating its success convinced the Kenyan government to help cover the cost of the insurance for poor pastoral families. The insurance has been offered commercially in Kenya for a decade. With government support, over a half million animals have been insured and over $10 million in payouts have been issued. 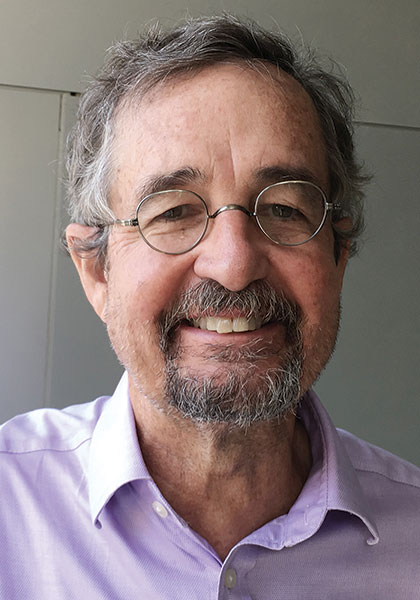 The difficulties in providing these programs for Samburu families are profound. Many Samburu are both illiterate and innumerate.

“To buy insurance, if you’re going to be an informed consumer, you really have to understand or grasp the idea of probabilities,” said Nathan Jenson, a senior scientist and economist with the livestock institute, which is working with UC Davis researchers in Kenya. “It’s hard to do that without the concepts of numbers and years.”

The women’s remote locations are also difficult for insurance agents to reach.

Other Samburu women enrolled in the programs face even greater challenges. Lomelo Lesillo had struggled to feed her five children after her husband died in a violent conflict with another tribe over water and grazing lands. She resorted to making charcoal, which is hard manual labor that makes little money.

To hear more about this story, you can listen to “How Climate Change is Punishing the World’s Poor” on Unfold, a UC Davis podcast.

“We’d carry bags of charcoal on our heads. It’s not an easy thing to do and doing it constantly, you sometimes contemplate if life is worth living,” Lesillo said.

Lesillo moved to a government forest conservation area in hopes of a better life. She and two other women in the Boma program sell maize flour, sugar and tea from a kiosk. She said in some ways, it has turned her life around. She was able to buy livestock for her son, which allowed him to marry, and put another son in secondary school. Yet the Kenyan government is forcing her to move off the protected reserve and back to where she came — an area bordering a rival tribe that sometimes steal livestock. The rustling can escalate to violence and death.

“It’s just as easy to fight the government than go there,” Lesillo said.

While her forced relocation might seem unrelated to her poverty, both have the same root cause — a climate that’s become increasingly unpredictable. Without enough green pasture for animals, people fight, steal livestock or illegally move into a government-protected forest to find the last remaining forage.

Lesillo has stopped her business and is banking every shilling because her future is just too uncertain.

In February 2020 — two years into the experiment — the UC Davis researchers and members of the livestock research institute interviewed Samburu women to assess their participation in the Boma and insurance programs. The data indicated that the programs were helping women help themselves and their families in both their health and economic well-being. 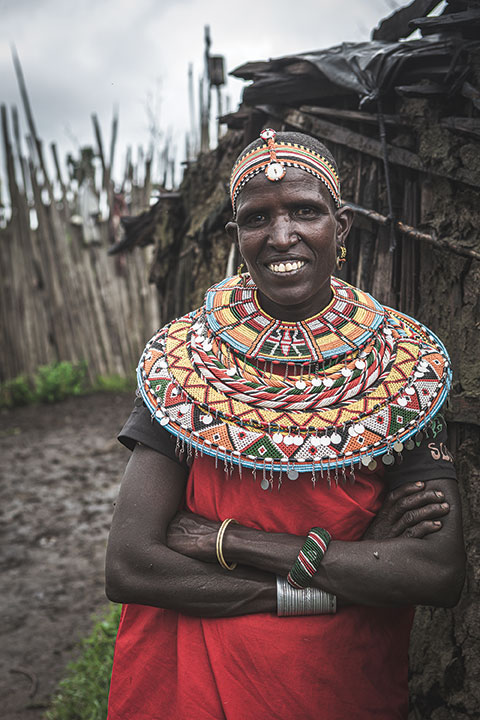 Lomelo Lesillo sold maize flour, sugar and tea from a kiosk through the Boma program. She still lives with uncertainty, living on government-protected land, where she hoped to find forage.

Then the pandemic hit. It shut down livestock trading markets. Goods became scarce. The cost of maize flour, a staple for Samburu families, increased by a third. Samburu were so cash poor, few had money to buy goods at the kiosks the women had set up as part of the Boma program.

Carter found families in the program that went without food at least one day a week doubled, from 33 percent at the beginning of the pandemic to 66 percent by September 2020. Parents were skipping meals so their children could eat. Some were going several days without food.

“In essence, COVID-19 had the same effect as a drought would for women in the Boma Project,” said Carter. “Unfortunately, COVID-19 is not an insured disaster.”

The one saving grace is that 2020 brought Kenya unusually heavy rains. Those rains left pastoral families with plenty of forage for their animals. Livestock trading markets have since reopened.

For women participating in the research the longest, household income has increased 30 percent, business assets have increased 250 percent and savings that get them through drought increased sixfold.

“I’m hopeful that these programs can help us address deep poverty and craft sustainable solutions,” said Carter. But he cautioned that climate insurance works only to a point. In previous research, he tested index insurance theoretically to see how effective it would be as a safety net for poor people under a changing climate. The study showed that insurance becomes more effective as the risk of drought or other climate-related events increase, but only so far.

“Past that point, even novel insurance solutions based on satellite technologies will not work, because these areas in Kenya will no longer be economically viable, simply because the risks there are too great and nobody can really make a go of it anymore,” Carter said.

Carter said he sees what’s happening in Kenya as a call to action to stem climate change and help the world’s most vulnerable people — before safety nets like the ones he is examining are no longer effective.