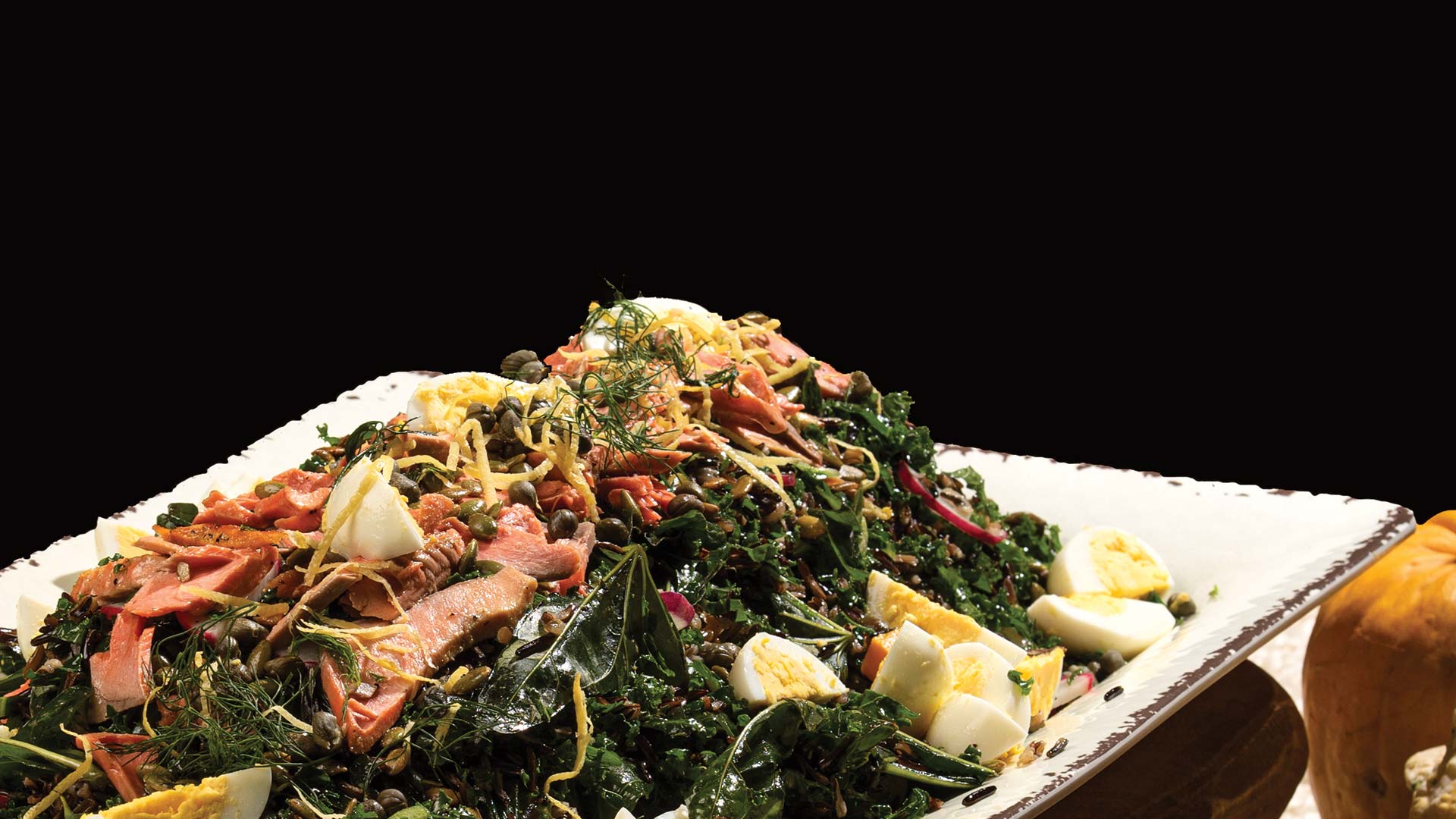 UC Davis ramps up its use of local foods in its dining facilities, increasingly choosing ingredients with ties to campus.

To the right of Cesar Cienfuegos’ desk, next to a stack of food magazines, is an arrangement of laboratory flasks of various fermenting vinegars, and notes on a whiteboard behind his desk compare the amount of protein in beef and crickets. A box below his desk holds a recent shipment of a coffee-mushroom mixture.

In the image above, the salmon salad is prepared with these ingredients:

“My audience is always asking for what’s new,” said Cienfuegos, executive chef at UC Davis’ Segundo dining commons. “We don’t like being stagnant because that’s not our clientele.”

His clients are UC Davis students, and in the dining commons and other eateries they’re increasingly being given the option to eat food grown on campus, sourced locally or produced by alumni.

The campus has always used some ingredients from those sources, but the practice ramped up in 2017, when UC Davis took over from longtime vendor Sodexo and began operating its three dining commons (a fourth is scheduled to open this winter) and numerous other eateries. The Coffee House remains independently operated by the Associated Students of UC Davis, but almost everywhere else a person can eat or drink on campus is now overseen by Student Housing and Dining Services, which is increasingly choosing ingredients with ties to campus.

“It’s almost like we have our own infrastructure to support our food,” said Kraig Brady, director of Hospitality and Dining Services.

That infrastructure includes a salmon fisher in Alaska, a Bay Area tuna company with operations in Thailand, a local rice grower, research farms on campus and more.

UC Davis’ effort to promote food with ties to campus or the region, a program dubbed “Aggie Grown,” is garnering recognition near and far: UC Davis has researchers on the advisory board of Menus of Change, a partnership between The Culinary Institute of America and the Harvard T.H. Chan School of Public Health to promote local sourcing, healthy foods and sustainability practices. Closer to home, a team of chefs from UC Davis Health and UC Davis — including Cienfuegos — prepared the appetizer for the ultra-exclusive (only 80 of 800 tickets were publicly available to be purchased through a lottery) dinner that closed out this fall’s Farm-to-Fork Festival in Sacramento. 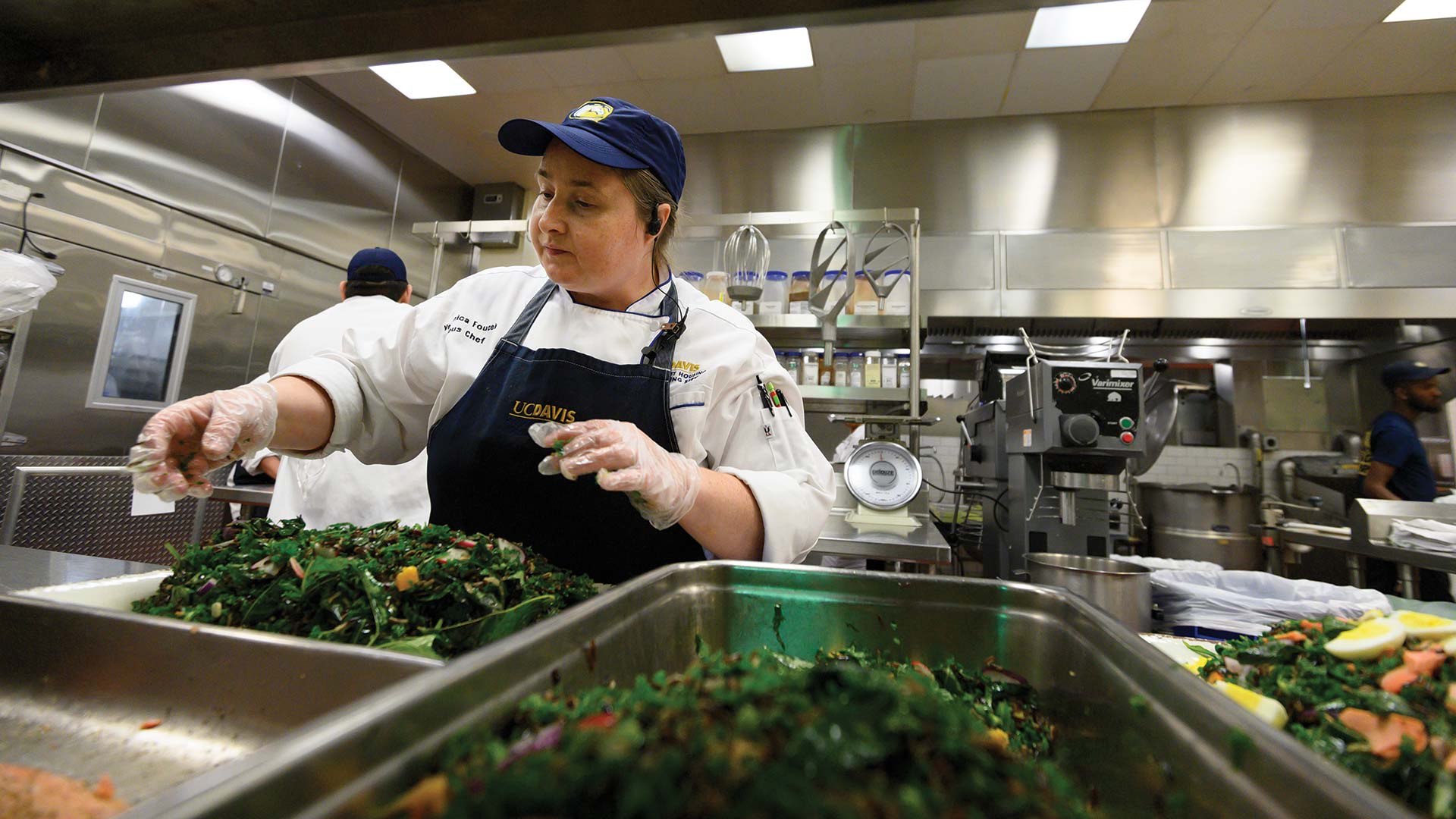 On campus, local food is being highlighted in both overt and subtle ways. Each October, a group of farmers who supply ingredients to the campus set up tables inside a dining commons and answer questions from the students who eat their eggs, broccoli and other items. TV screens around the dining commons regularly display photos of farmers and the ingredients they grow, and Dining Services this fall is formalizing its sustainability, nutritional and diversity-focused practices in a document tentatively named “The Principles of Sustainability.”

“This generation of students really does care about where their food is coming from,” said Richard Ronquillo, associate director of departmental and student outreach in Student Housing and Dining Services.

The arrangement both satisfies a student desire and benefits the farmers.

“Their commitment to local sourcing and partnering with our farm has been a big driver in our success, and we appreciate and value that relationship tremendously,” said Michael Bosworth ’04, M.S. ’06, founder of Next Generation Foods, which grows rice in Olivehurst and also distributes products pooled from smaller farms. His company has sold rice to UC Davis since it was founded in 2006 by Bosworth and Andrew Brutlag ’03.

Sean Wittenberg ’05, founder and CEO of Safe Catch Tuna, was a student at UC Davis when doctors attributed his mother’s health issues to elevated levels of mercury in her system. He founded a company devoted to testing the mercury levels of every fish it processes and said he hopes that his product being sold and used on campus will provide an example for students.

“Ultimately we’re acting as a potential model for students who are there today to realize the world is a big place and they can have a big impact in it as long as they put their education to good use,” he said.

UC Davis isn’t blindly buying anything with a local or alumni tie — it still has to make business sense. Dining Services must pay market rates for its supplies, so it can’t pay more just because a business is owned by alumni or is local. And many of these purchases are still small, because any deal larger than $100,000 has to be put through a public bidding process.

Still, the operation has a lot of buying power — it serves 1,200 burritos in a single night — and it’s helping organizations on campus, too.

The Harvesting: From the Student Farm to Campus Plates 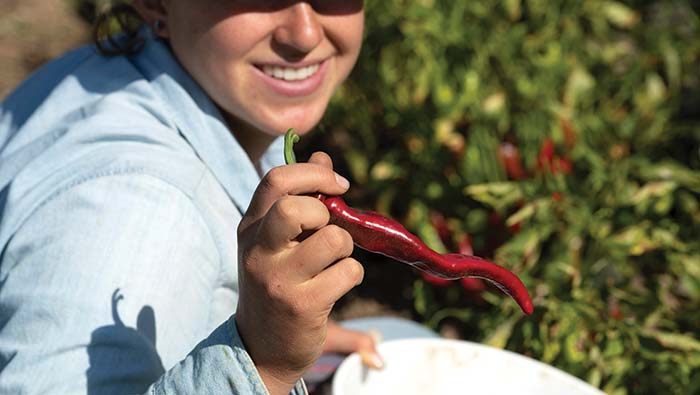 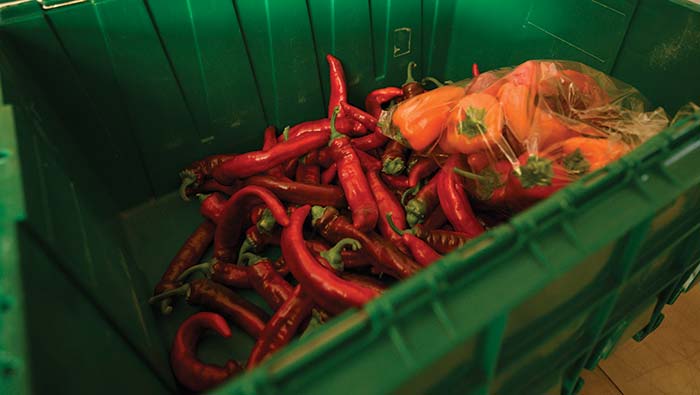 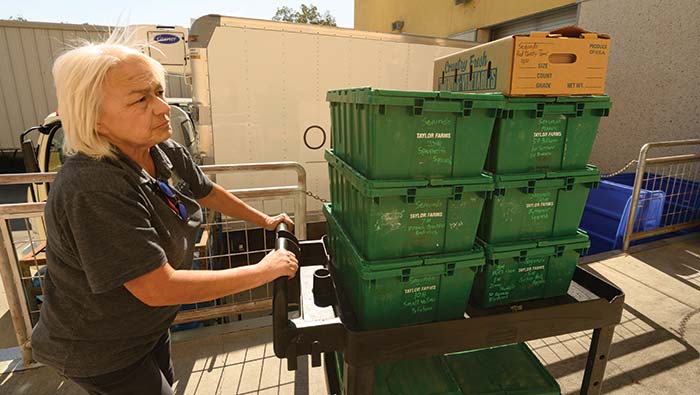 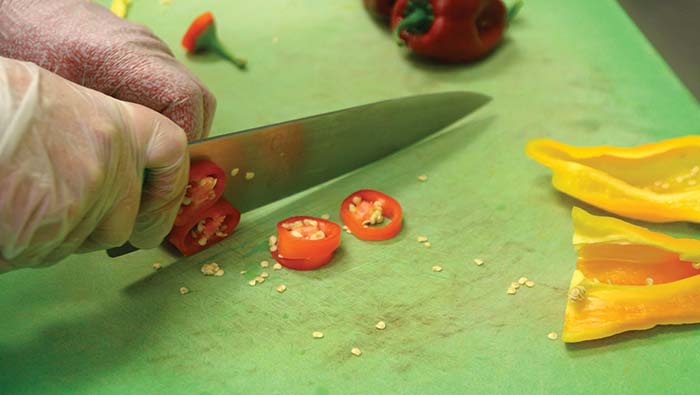 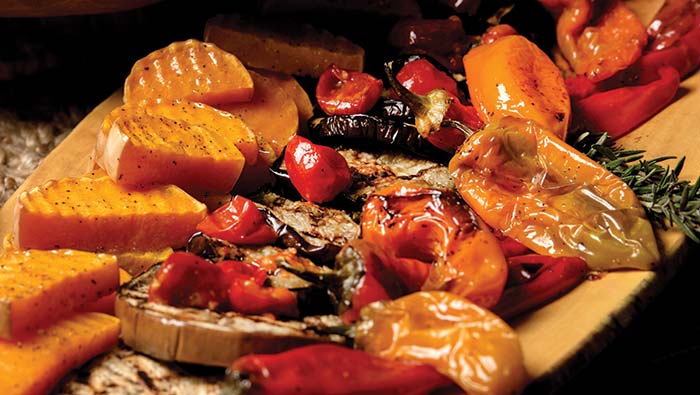 Ingredients from UC Davis programs that study commercial agriculture are increasingly finding their way to campus tables, too.

Russell Ranch, a 300-acre chain of smaller plots on the western side of campus, has been home to discoveries about how conventional and organic farming practices compare with respect to yields, nutrient use and carbon sequestration in the soil. It also produces corn, processing tomatoes and wheat on a large scale.

Director Kate Scow, a professor of soil science and microbial ecology, said the processing  tomatoes are sold to commercial processors, where they’re mixed in with tomatoes from many other farms and cooked down to tomato paste, salsa and other products. But they’re also sold to Dining Services, which showcases them in Russell Ranch-branded pasta sauces, vegetarian burgers and more.

“Having our vegetables in the dining halls brings recognition to our research program,” Scow said. “Russell Ranch becomes a known entity and it’s associated with more than science and publications. … There’s huge value in being able to keep some of it on campus where our students and staff can see and taste the fruits of our investigations.”

Dan Flynn, executive director of the UC Davis Olive Center, said the center seeks “to do for olives what UC Davis did for wine.” The center grows olives on 10 acres on a historic orchard in Winters with five acres planted in May.

“The reason I wanted to expand was not only to have more orchards to do research that will be impactful to the industry, but also to supply more of the olive oil needs of the campus,” Flynn said.

The center relies on the proceeds from sales of olive oil to help fund its operations as well as research on yield, pest resistance, weed management and more. Those sales mostly come in the form of gift sets and individual bottles in UC Davis Stores. Now, some campus chefs stock their kitchens with UC Davis olive oil, and it’s a constant companion to the dining commons’ salad bars.

Flynn and other small producers will never be able to supply 100 percent of the massive volume of ingredients the campus uses, Brady said, but those local ingredients have still become a key part of the mix, providing educational value in the process.

“Because of our partnership with Dining Services, students get to see what goes into developing a community-based food system,” said Katharina Ullmann, Ph.D. ’15, director of the Student Farm, which harvests produce for campus eateries twice a week. “They gain a deeper appreciation for what it means to grow food sustainably and get to put what they’re learning in the classroom into practice in the field.”

The farm, which also sells to consumers and donates other items, even plans some crops according to what campus chefs want. This fall, the Student Farm grew Chinese broccoli, lemongrass and a new variety of bok choy to be used at Latitude, the campus’s new, internationally focused dining commons and market.

“This is such a great reminder on a daily basis of where our food is coming from and the actual work it takes to produce it,” said Daniella Schoenfeld, a junior sustainable agriculture and food systems major and a lead student farmer.

“The farmer or land shouldn’t be bending to meet my needs. It should be that we practice the art of making food tasty.”

A challenge for chefs

Maurice Pitesky oversees the UC Davis Pastured Poultry Farm, which teaches new farmers how to integrate pasture-raised chickens onto their land. The program regularly has a flock of around 150 hens raised by students, which he knows is “a drop in the bucket” to an operation like Dining Services. Still, many of the eggs his chickens laid wound up on students’ plates.

“It was a good experience for our students to work with Dining Services,” he said.

The campus chefs took it one step further. On a commercial egg farm, when chickens stop producing eggs, they’re usually killed and discarded, Pitesky said. Dining Services worked with the Pastured Poultry Farm to find a use for the meat of those chickens, which Pitesky said can be challenging because egg-laying hens usually have tougher meat.

This summer, Cienfuegos and sous chef Barry Chernick spent most days in an empty kitchen, fine-tuning recipes and trying out new dishes. That tinkering isn’t just idle curiosity — the dining commons have served as a living lab to test more sustainable recipes.

The Pastured Poultry Farm has hosted taste tests there seeking to answer the question: Do eggs taste different when they come from hens whose diets are supplemented with insect larvae? Pitesky said hens usually eat soy and corn that might be needed for human consumption as the world’s population increases.

“You can feed those hens up to 20 percent larvae, and it doesn’t affect food safety or quality,” he concluded. 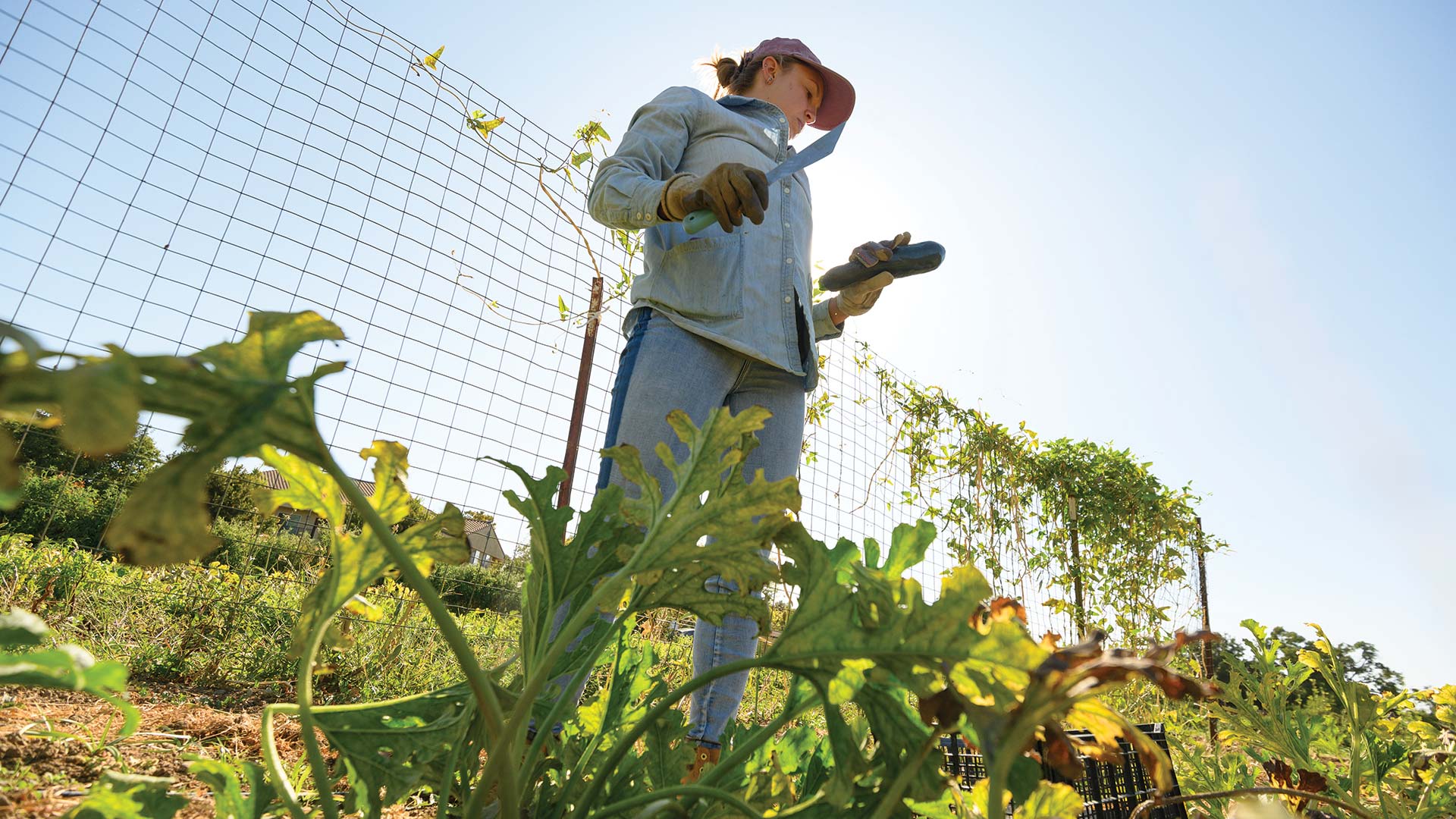 Dining Services also worked with food science and technology professor Jean-Xavier Guinard and then-Ph.D. student Molly Spencer to test another kind of substitution: finding ways to reduce the amount of meat in dishes like tacos or burgers without impacting flavor. The result: research published in the journal Appetite and a 70 percent beef, 30 percent mushroom burger that was rolled out to all of the campus’s dining commons without a single complaint, Cienfuegos said.

“It’s something that the rest of the world has figured out,” he said. “If you have a contrast in your dish, it will be tasty no matter how much money you have to put into animal protein.”

“The farmer or land shouldn’t be bending to meet my needs,” he said. “It should be that we practice the art of making food tasty. In other countries you get what you get and make it taste good.”

Cienfuegos said he sees his role as a chef not only as making delicious food, but also making sustainable choices and presenting students with dishes that demonstrate why local, sustainable sourcing is important.

“How can I educate people on making the right decisions to support the right idea and the right farmers?” Cienfuegos said. “That’s why we push local farming — it’s eating with a purpose.”