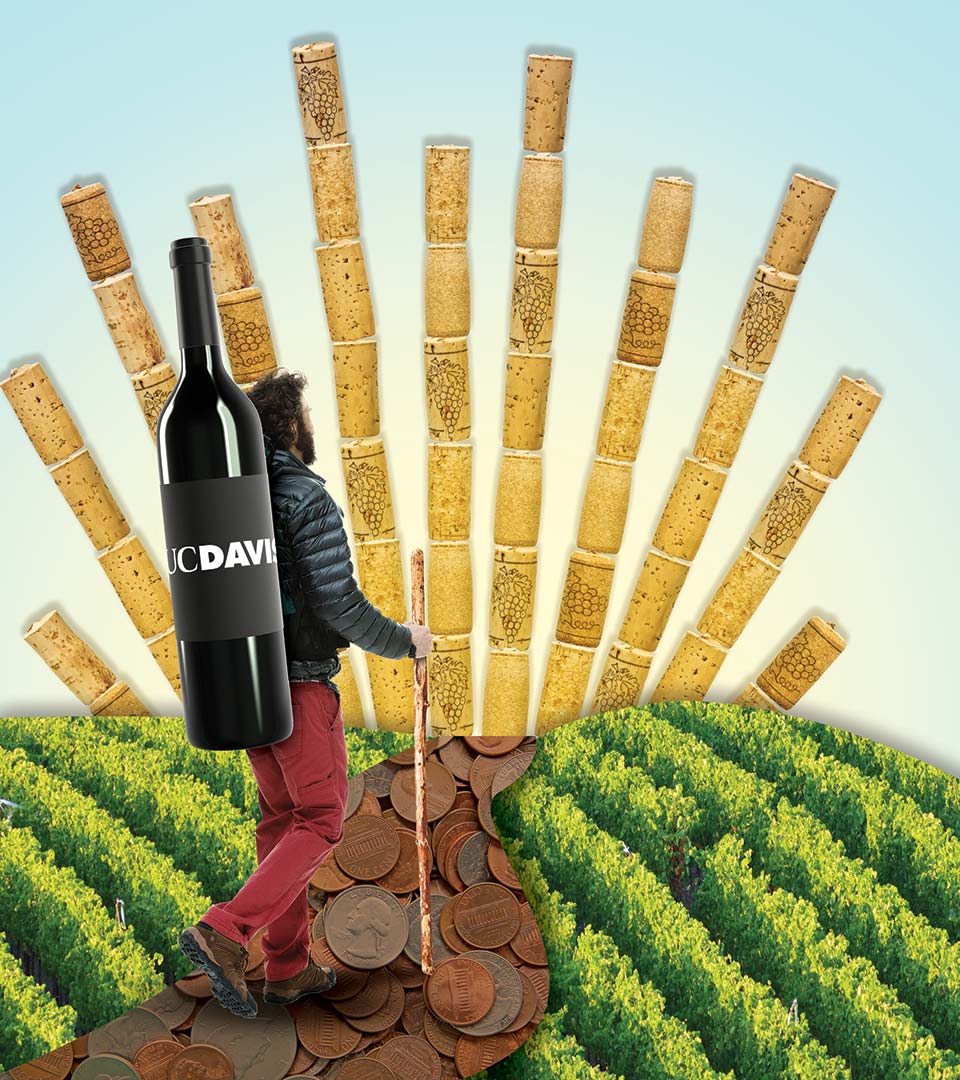 A new law will allow UC Davis to market and sell its wine to the public, enabling students to learn even more about the industry.

Every year, students in UC Davis’ viticulture and enology program strive to make the best wine they can.

Then they dump it down the drain.

“It’s pretty sad,” said Jordan Chaffin ’15, M.B.A. ’19. “When we were students, we were sitting around wondering, ‘Why can’t they sell this?’ as we were dumping it down the drain.”

A new state law this year gives UC Davis the ability to sell wine to the general public. The beverage could previously only be tasted before it had to meet its fate at the bottom of a drain — the state constitution bans state agencies from manufacturing or selling alcohol — a few bottles were given away as gifts, like when the department thanked a speaker or other visitor, but the gifts had to be wine made for the university by another producer using UC Davis’ grapes.

That all changed with Senate Bill 918, which Gov. Gavin Newsom signed into law on the last day he could do so this past year. The law, by Sen. Bill Dodd (D-Napa), cleans up a 2016 bill by then-Sen. Lois Wolk (D-Davis), and is written specifically to allow UC Davis to form a nonprofit organization that can sell wine made at the university.

There’s no question the university knows how to make good wine. Equipped with the world’s most advanced and sustainable winery, students interact with faculty members from every scientific discipline that impacts grape growing and winemaking. They are part of the same program that both helped the wine industry restart after prohibition and developed the same objective methods of sensory evaluation that are used by producers and consumers around the world.

This change will not only allow more people to taste UC Davis wine, but it will provide some additional funding the viticulture and enology program can use to upgrade facilities and equipment, or hire additional winery or vineyard staff members.

It will also make the winery more environmentally friendly by putting the previously wasted wine to better use, and allow students to learn more about the wine industry by showing them another side of the process.

The first step will be forming a nonprofit, as yet unnamed, which will handle the wine sales and transfer the proceeds back to the department. Officials hope to complete that work by this summer.

Then wine can be sold in bottles to consumers and in bulk to producers who could then use it in blends of their own or use it to produce vinegar, distilled spirits or other products.

But Professor David Block, Marvin Sands Department Chair and Ernest Gallo Endowed Chair of Viticulture and Enology, is quick to point out that UC Davis won’t challenge large-scale, commercial winemakers anytime soon. Research and education will remain at the forefront.

“What we’re doing in that winery is mostly teaching and research,” he said. “Our goal is not to create wine — it’s to create knowledge. Some of those wines by design are not going to be good wines.”

For example, an experiment to show how different variables affect the mouthfeel of wine will naturally produce some wines that create a strong “puckering” feeling, Block said.

He emphasized that students must be allowed to make mistakes, and if every wine is meant for a store, those mistakes are much costlier.

“We feel that our students get a lot from fumbling around a little bit and trying to figure things out on their own,” he said “And we didn’t want to be in a situation where that wasn’t going to be able to happen.”

At the same time, any wine with UC Davis on its label will have to be of top quality.

“All of us would want to be proud of wines that come out of UC Davis,” he said. “If you have the top program in the world producing lousy wine, that’s not a good idea.”

The focus on learning and experimentation means UC Davis students and staff make around 450 to 500 different types of wine each year, sometimes in quantities as small as 5 gallons (a standard wine barrel is 60 gallons). For example, Professor Andrew Walker, a geneticist, researches new kinds of grapes with the goal of making vines that are more resistant to disease, and sometimes makes small batches of wine to test their progress.

The small quantity of wine being produced on campus means UC Davis wine likely will not be available in grocery stores or restaurants, but Adrian Lopez, director of State Government Relations at UC Davis, said industry lobbyists were concerned that the university’s pedigree could present a dangerous competitor.

When they suggested a cap on the amount of wine UC Davis could sell, Block and others were happy to agree to a limit of 20,000 gallons a year — more than triple what the university produces today.

More than likely, UC Davis wine that is not sold in bulk to other producers will be sold in bottles, primarily to alumni and others who already have a relationship with the university.

“We heard a lot during the process: ‘All we do is focus on making the best wine. There’s this whole other side of the industry that we have to understand — how to sell our wine, how to market our wine.’”

Winemaker and winery manager Leticia Chacón-Rodríguez, M.S. ’00, said she feels a strong bond with other campus-made products like olive oil and honey, and suspects the same could be true for wine.

“When I saw that, I said, ‘Oh, I want to buy the honey that UC Davis is making.’ That makes me feel connected to where I studied,” she said.

And while UC Davis has decades of experience with making wine, the marketing and selling of Aggie-branded wine is new territory.

To answer questions like which wines UC Davis should sell and how it should price each bottle, the university turned inward.

Each year, students earning their M.B.A.s at the Graduate School of Management take on a capstone project to provide advice, plans and insight to a real business. These IMPACT M.B.A. Strategic Projects have included recommendations for a Blue Diamond Growers farm-to-factory tour attraction, an exploration of the impacts of a legal cannabis industry on the city of Sacramento, analysis and recommendations for increased collaboration between IBM and academia, and suggestions for how the Sacramento Kings should leverage the growing e-sports craze.

In 2018, a group of five students led by Chaffin spent 10 weeks writing a detailed business plan for the Department of Viticulture and Enology’s wine sales program.

“We heard a lot during the process: ‘All we do is focus on making the best wine. There’s this whole other side of the industry that we have to understand — how to sell our wine, how to market our wine,’” said Laudan Yavari, M.B.A. ’19. “In a way, we were leading them in how to create a business that would be successful.”

They spent long days interviewing faculty members, wine distributors and administrators from other universities, and, of course, tasting wine. They suggested focusing on two wines: a flagship cabernet sauvignon made from the university’s Oakville Station vineyard in the Napa Valley, and a less expensive albariño wine made from the white wine grapes grown on campus.

“We recommended selling directly to consumers [and] building the brand of the Davis winery,” Chaffin said, noting that the university name could command a higher price. “Your wine is ‘X’ quality and you can hit this price, but because you’re UC Davis and a mission-driven organization, you can go a little higher.”

They also suggested advocating for a change in the law, which UC Davis did through Lopez and the Office of Government and Community Relations.

Block said staff hadn’t yet decided how to price the UC Davis-branded wine, but it likely won’t be a bargain-basement beverage. For one, the university doesn’t want to appear to be marketing alcohol to students. And while the university brand will add prestige to UC Davis’ labels, it also adds cost.

“Grapes are expensive,” he said. “You can’t really buy those grapes and make a $10 wine.”

But that might not be all bad — he said in recent years, consumers have opted for more expensive wine.

“The American consumer has chosen to buy more expensive wine that is of better quality, and the larger producers have noticed this and have gone after that,” Smiley said, noting the upper tiers of the wine market have become more competitive as a result.

He called the wine aisle “the most crowded shelf in the store,” and said UC Davis will naturally compete with all other wine producers, including many run by UC Davis graduates.

“Our goal is not to create wine — it’s to create knowledge.”

“Time will tell if it’s too crowded,” Smiley said. “We do have some advantages — our reputation and alumni base.”

UC Davis isn’t the only university that sells wine, either. Even though Senate Bill 918 was just passed, California State University, Fresno, and California Polytechnic State University, San Luis Obispo, have sold wine for years through different legal setups. Fresno State’s offerings range from a “TailGate Red” for $7 to a “Presidents Reserve” syrah or barbera for $18. Cal Poly’s wines range from $18 to $24 a bottle, and that university offers a wine club.

A little farther away, the University of Adelaide in Australia has been selling wine for about 20 years, starting with inexpensive, unbranded wine sold by the case and expanding to university-branded wine made by staff and mainly meant for university events. Those wines sell for $12 Australian per bottle, and the university plans to bring a higher-end wine to market this year.

“Value for money seems to work well for us, and we make approachable wines,” said Associate Professor Paul Grbin, the university’s head winemaker. “Most of our products are easy to drink. We did not really focus on alumni, but I feel that is a market with untapped potential.”

UC Davis-branded wine is likely at least a year and a half away from market. The first crops that can be harvested under the new law will be ready in August, and while bulk wine could be sold to other producers immediately, wine bound for individual bottles would have to be aged. The albariño could be ready in the spring of 2022, while the cabernet would need an additional year or two, Block said.

He estimated the majority of wine sold by the university would be sold in bulk, with only about 10 to 15 percent, at most, going into bottles.

“It will always be a very small production,” Block said.

Once sales get off the ground, students could also be involved in the finance and marketing side of the business, making their education even more like working in a commercial winery.

But officials will have to take care not to make it too closely resemble its commercial counterpart.

“When you know all your wine is going to go down the drain, you can do random stuff,” Chaffin said of student experiments. “As a student, it’s nice to have no consequences [if something goes wrong]. Somehow Davis is going to have to find a balance.”

“Anything we can do to create more knowledge or better trained students — that’s what we want to do.”

Did you enjoy this article? Do you want to read more about how Aggies are thriving?

If you said, “Yes and yes!” then subscribe to get the print edition of UC Davis Magazine mailed directly to you. Amazing science? We’ve got that covered. Culture? That, too. Plus events, alumni profiles and more.