Frank Mitloehner sits inside a trailer at the UC Davis dairy barn as equipment in front of him spits out data. Next to the trailer, a Holstein cow has its head and neck inside a huge, clear-plastic chamber that resembles an incubator for newborns. The cow calmly eats its feed while giant tubes above the chamber pump air in and push air out.

Mitloehner is measuring gases that come from cows’ stomachs and ultimately contribute to global warming.

“Cattle are the No. 1 agricultural source of greenhouse gases worldwide,” said Mitloehner, a professor and air quality specialist in the Department of Animal Science.

Each year, a single cow will belch about 220 pounds of methane, which is shorter lived than carbon dioxide but 28 times more potent in warming the atmosphere.

Methane isn’t the only environmental drawback of cattle. Raising them takes up nearly half the land in the United States (see sidebar). With the escalating effects of climate change, these facts have advocates urging the public to eat less beef. They contend it’s an unsustainable diet in a world with a population expected to reach nearly 10 billion by 2050.

But animal-sourced food also plays a vital role in global nutrition, according the Food and Agriculture Organization of the United Nations. As a result, Mitloehner and other UC Davis researchers are investigating economical ways to make livestock production more environmentally sustainable around the globe.

Better breeding, genetics and nutrition have increased the efficiency of livestock production in the U.S. In the 1970s, 140 million head of cattle were needed to meet demand. Now, just 90 million head are required. At the same time, those 90 million cattle are producing more meat. 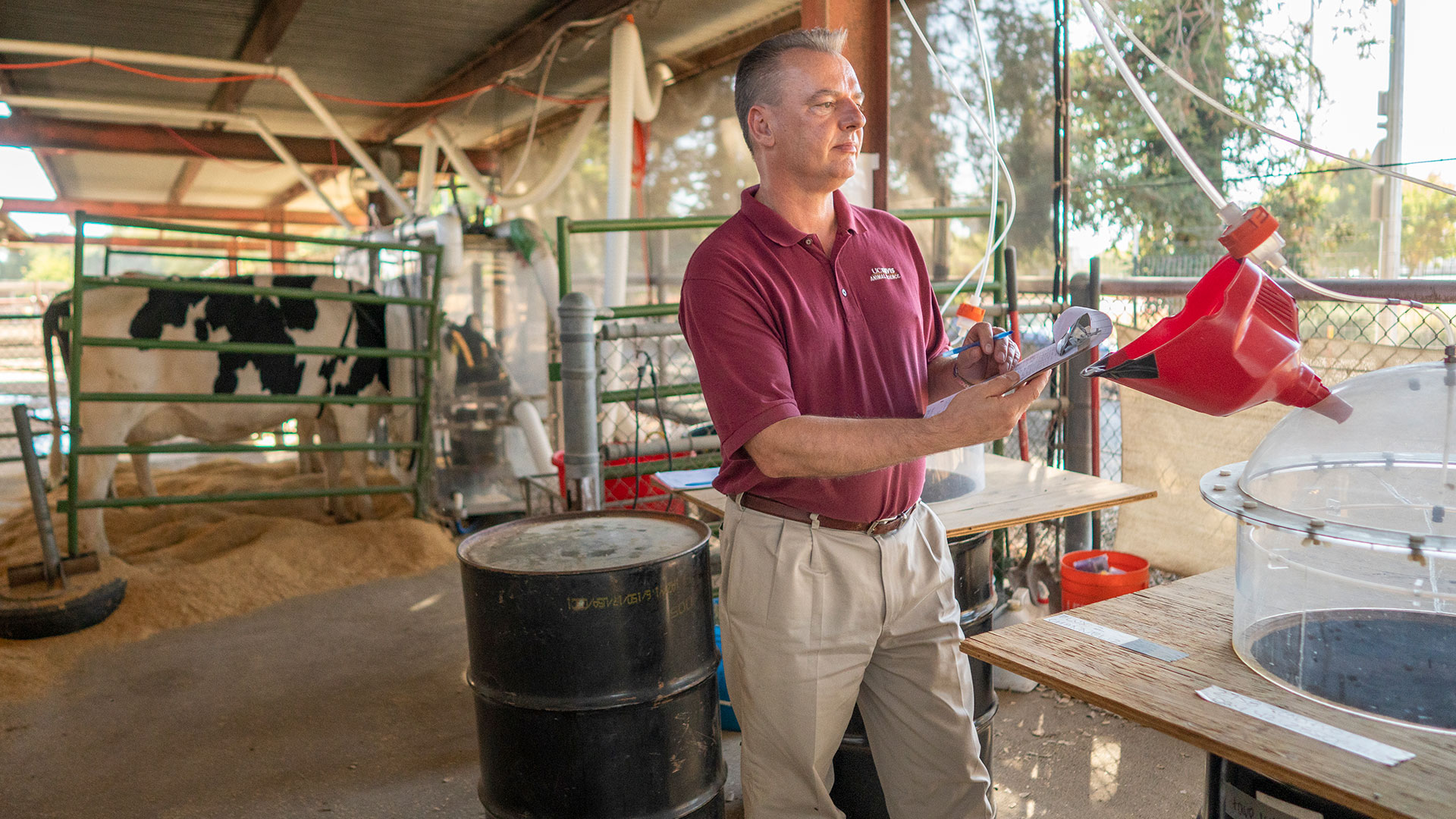 India, for example, has the world’s largest cattle population, but the lowest beef consumption of any country. As a result, cows live longer and emit more methane over their lifetime. In addition, cows in tropical regions produce less milk and meat, so it takes them longer to get to market.

“If you have hundreds of millions of cattle to achieve a dismal amount of product, then that comes with a high environmental footprint,” Mitloehner said.

Researchers at UC Davis have projects in Vietnam, Ethiopia and Burkina Faso to boost livestock productivity through better nutrition. That may be critical going forward as demand for meat is rising in developing countries.

“We expect by 2050 there is going to be a 300 percent increase in beef demand in Asia,” said Ermias Kebreab, a professor of animal science and director of the UC Davis World Food Center.

Kebreab, Mitloehner and other UC Davis scientists are looking for ways to make cows more sustainable and less gassy. One way to do that is to make their high-fiber diet easier to digest, so scientists often turn to feed supplements for this purpose. It sounds simple, but finding an affordable and nutritious additive has proved difficult. 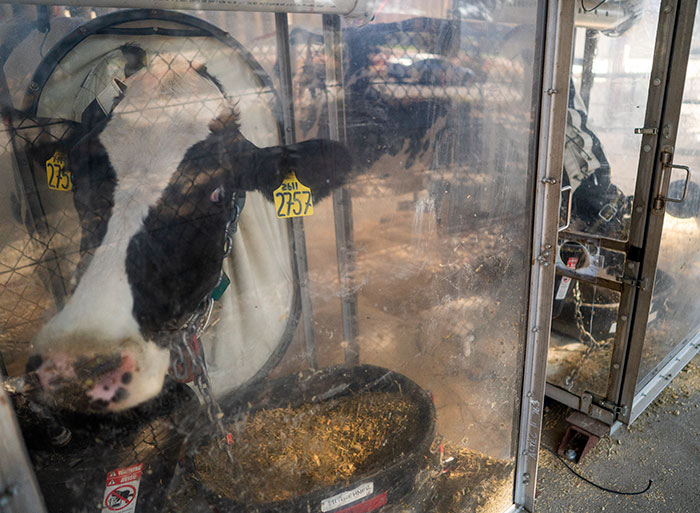 The plastic chambers help measure the amount of gases coming from the cow’s stomach more precisely. Each year, one cow can belch 220 pounds of methane, which is 28 times more potent than carbon dioxide. (Karin Higgins/UC Davis)

However, Kebreab has succeeded in finding such a supplement by feeding dairy cattle a plant way off the trough menu: seaweed.

“We’ve done one trial and showed that there is up to 60 percent reduction in methane emissions by using 1 percent of seaweed in the diet,” Kebreab said. “This is a very surprising and promising development.”

In addition to reducing methane, the seaweed doesn’t make the cows’ milk taste bad. He’s now testing the diet on beef cattle.  It could be a relatively inexpensive solution for reducing emissions.

This type of red seaweed, called Asparagopsis taxiformis, has one big drawback: a wild harvest is unlikely to provide enough of a supply for broad adoption. Other scientists are looking for ways to grow it to scale and Kebreab remains hopeful that feed additives hold the most promise.

“I believe that we will have a solution, two or three good candidates, that would reduce emissions quite substantially,” Kebreab said. “I can see that happening in the next few years.” 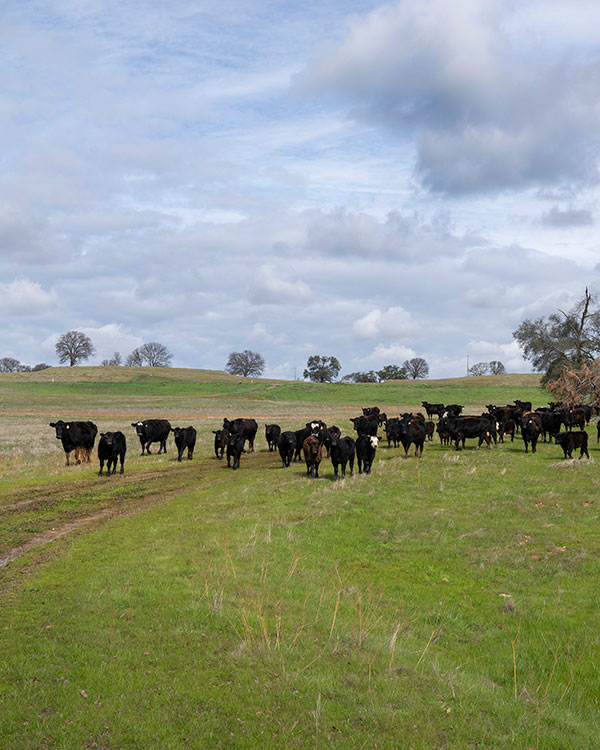 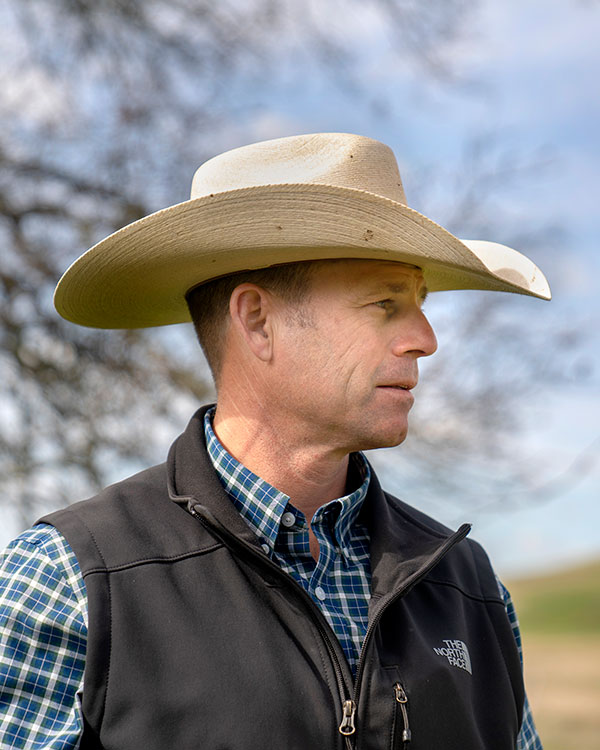 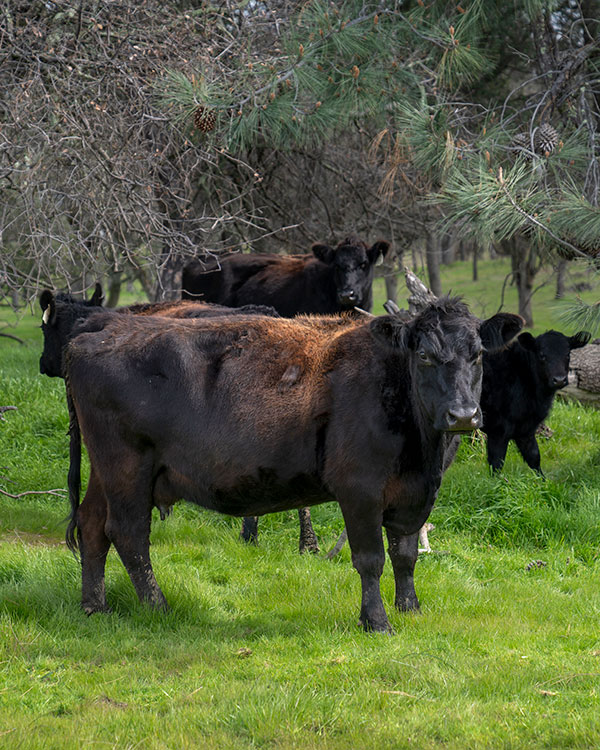 Rangelands as Part of the Climate Change Solution

Besides emitting greenhouse gases, another common criticism of beef production is that cows take up nearly half the land in the United States. Overgrazing those lands can degrade soil health and biodiversity. Yet researchers argue that, managed correctly, cows can help restore healthy soils, conserve sensitive species and enhance overall ecological function. Proper cattle grazing management can even help mitigate climate change.

On the Van Vleck Ranch east of Sacramento near Rancho Murieta, Jerry Spencer manages about 2,500 cattle. He maintains a diversity of native grasses to keep the cows healthy and rotates herds between pastures to give the plants a rest from grazing and opportunity to recover.

“You want to leave as much as grass as possible to allow water infiltration and healthy root systems,” Spencer said.

Maintaining healthy root systems isn’t just good for the plants. The longer and denser the roots, the more they can hold atmospheric carbon in the soil.

Ranchers really have little financial incentive to let their herds overgraze or let their herd’s hooves compact and degrade soils. Spencer said if the land degrades, then the cattle’s health can suffer as well.

“Sustainability is keeping everything viable both economically and biologically,” said Spencer. “Ranchers don’t continue to exist if either one of those are really out of balance.”