Colleges across the country face an increasing demand for mental health services. How can they address the needs of a growing, diverse student body? 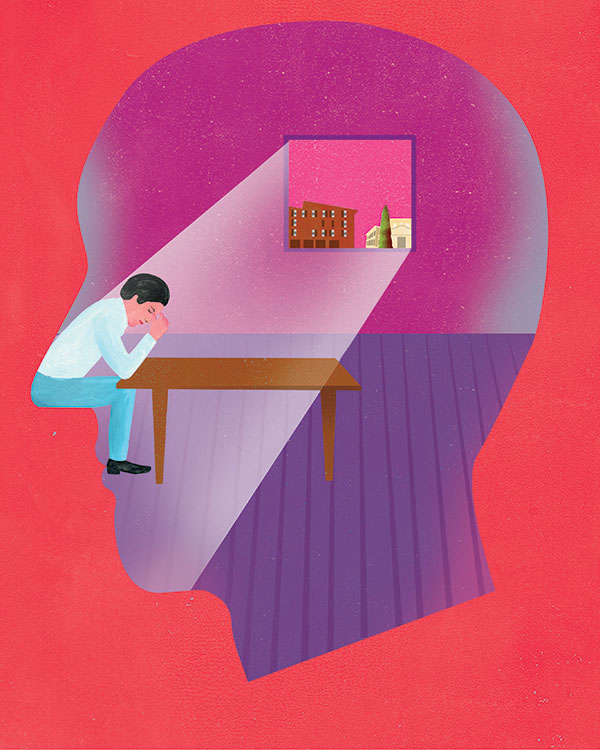 When Milly Judd came to UC Davis, she thought she was coping well with the anxiety, depression, obsessive-compulsive disorder and bipolar disorder she’d been diagnosed with in high school. But when she arrived, one of only seven students from her St. Louis high school who came to California, she said she spread herself thin to try to make new friends.

“I couldn’t keep up,” said Judd, now a senior majoring in animal science. “My bad coping mechanisms came back. I wasn’t dealing with it well.”

Others who shared a floor with her in a residence hall became concerned for her well-being and convinced her to visit a hospital. She was admitted and stayed for three days. She called the experience a helpful “wake-up call.”

Judd is part of a growing wave of students who come to UC Davis more likely to seek mental health treatment, stretching existing infrastructure. The university is responding by hiring more counselors, adding new ways to speak with counselors and increasing promotion of existing resources. As universities around the country cope with this trend, they also face the unique challenges of providing mental health care on a college campus.

At UC Davis, much of the response has been dictated by one of a trio of student-focused task forces convened by Chancellor Gary S. May in his first year on campus. The groups — addressing housing, food security and mental health — each issued multipage reports last summer and have since merged into a single committee, scheduled to deliver its final report in June.

“We want our students to feel like this is a welcoming community, however they present,” said Emily Galindo, interim vice chancellor for Student Affairs and chair of that group, the Basic Needs Oversight Committee. “I tend to be very optimistic, and I can’t help but want that for everybody I come in contact with.”

The original mental health task force, a nine-person group with five students, asked the campus to hire additional case managers, move mental health professionals to a more central and welcoming location, form a group that would convene when a student dies and more. Many of those recommendations are already being put into place: Counseling Services hired four additional counselors over the winter and spring quarters and moved mental health care providers into North Hall, a building adjacent to the Quad. A new “postvention” committee will decide how to respond when a student dies. The department that provides counseling to students is now developing a new strategic plan and reviewing its overall strategy, taking into account the increased demand.

“Given the changes in what’s needed of us, how do we react?” said Paul Kim, who this March was named director of Counseling Services.

Tackling the stigma of mental health means talking openly in many forums. In a March Q&A session with students on Instagram, May answered a query about “imposter syndrome,” the feeling of being inadequate, by saying he had fallen victim to it in the past. Just a week later, Alex Fisher-Wagner, a UC Davis student who creates YouTube videos for 2,500 subscribers on topics like what students do over a typical spring break and how to choose a major, said in a 10-minute video that he was temporarily withdrawing because of anxiety and other mental health issues. A UC Davis-specific section on Reddit has seen about two dozen posts about depression over the past year, many of which could only be seen on a college campus. “Feeling depressed after (a) midterm,” one user wrote.

“Students are much more comfortable approaching the counseling center and asking for help. They don’t see it necessarily as a sign of weakness.”

Academic pressure isn’t limited to UC Davis’ rigorous quarter system; it begins before students even enroll in college, said Nance Roy, an assistant clinical professor of psychiatry at Yale University and the chief clinical officer for The Jed Foundation, which advises high schools and colleges — including UC Davis — on ways to promote mental health and reduce suicide.

High school students face enormous pressure, both from their schools and from parents pushing for good grades and extracurricular activities that can be listed on college applications, Roy said. And once they arrive at college, they often don’t have friends who can act as a support system.

“It’s no wonder that they’re completely stressed,” she said. “If, on top of that, you struggle with a mental health condition, you’re dealing with a perfect storm.”

Self-care can be difficult for students. Amanda Lipp ’14 said she knew during her freshman year in college — then a student at California State University, Chico — that she needed mental health care, but didn’t want to seek treatment on campus, where counselors are in the same building as what was then called Disability Support Services. That year, she had an episode of psychosis that led to her hospitalization. There she learned to better express herself using crayon sketches, and she eventually graduated from UC Davis. She is now a documentary filmmaker and public speaker.

Students also face the pressure of being constantly connected with idealized versions of each other’s lives — and an endless stream of distressing news — on social media, Roy said.

But social media has also provided avenues for students to open up, like the many Reddit threads on depression or loneliness. Students said they see therapy appointments plainly visible on friends’ shared online schedules.

Students’ willingness to discuss mental health — and a reduction in stigma — may be behind the uptick in students seeking treatment, said Dennis Heitzmann, the retired senior director of counseling and psychological services at Pennsylvania State University and a member of the American Psychological Association.

“What we find ourselves in the midst of right now is probably the greatest expansion of counseling and psychological services in my experience, and probably in the history of student mental health,” Heitzmann said, citing his four decades working in the field. “Students are much more comfortable approaching the counseling center and asking for help. They don’t see it necessarily as a sign of weakness.”

Increasing demand around the country

The trend is visible around the country, and it isn’t new: In a 2014 survey of collegiate counseling center directors conducted by the University of Pittsburgh, a majority said students were booking appointments at an increasing rate. The same survey found “a steady increase in the number of students arriving on campus that are already on psychiatric medication.”

“What that means is, of course, more people are coming forward to request services and every college across the country is having trouble keeping up with demand,” Roy said.

That increasing demand has led to full schedules for counselors at UC Davis.

While many students now may feel more comfortable asking for help with depression, anxiety or other issues, officials said more work needs to be done to reduce the stigma around mental health treatment.

Judd said she has waited weeks to see a counselor on campus, although she said things “have gotten better” in the past year. She and some other students are offering another avenue by creating their own support networks. Judd is president of the Mental Health Initiative, an Associated Students of UC Davis-backed group that each January hosts a conference with student and professional speakers, and workshops focused on reducing stress, dealing with grief and more.

Peer support is important, but can’t solve all issues. Some students may benefit from a more formal kind of treatment.

UC Davis has increased access to therapy. In addition to the counselors hired this year, Counseling Services began offering online appointment scheduling after receiving numerous student requests. Nearly 300 conversations have taken place over a text message-based crisis hotline since it was launched in June 2018. That service, in which an outside vendor connects students with counselors around the country, is overseen by Emilia Aguirre, a health promotion specialist for mental well-being in Student Health and Counseling Services. No other UC campus has a staff member devoted solely to promoting mental health. She said the best way to provide help to students is to promote a holistic approach in which faculty, staff and students are aware of existing resources and willing to provide support when it’s appropriate.

“Some students benefit from seeking counseling services support, but not all seek it,” Aguirre said. “It’s all about being able to talk about it with someone you trust.”

No one-step solution to better mental health care on a college campus exists. Students who are depressed after a poor showing on a final exam have very different needs than those who require hospitalization.

University counseling systems across the country aren’t designed to provide long-term care for the most acute cases because that level of therapy would greatly reduce the total number of students who could be seen, Roy said.

But the university must do everything it can to address students’ mental health issues, Kim and others agreed. He pointed to a 2017 American College Health Association survey of UC Davis students that showed 16 percent of respondents said they had considered suicide.

“It’s essential that we address this,” Kim said. “It is quite serious.”

While many students now may feel more comfortable asking for help with depression, anxiety or other issues, officials said more work needs to be done to reduce the stigma around mental health treatment. UC Davis in particular has focused on students from marginalized communities, which the Department of Health and Human Services said are far less likely to seek treatment. For instance, senior Katrina Manrique, a history and English double major, a member of the mental health task force and co-chair of the UC Davis Student Mental Health Coalition, was reluctant to seek treatment for her depression because she felt her issues paled in comparison to those of her parents, who immigrated from the Philippines and worked hard to give her a better life.

“Should I even be feeling sad?” she recalled thinking during her junior year. “I hold a lot of it internally, then break down.”

She also wanted a counselor who shared her Filipina identity, but had trouble finding one.

UC Davis has a team of six Community Action Network counselors, specialized staff members who are embedded with a dedicated community, like the Student Recruitment and Retention Center and the Lesbian, Gay, Bisexual, Transgender, Queer, Intersex, Asexual Resource Center. When Kim came to UC Davis in 2009, he was the second such counselor hired, and split his time between the Cross Cultural Center and the Department of Asian American Studies.

“It was a cutting-edge program,” Kim said. “That program over time has solidified. It’s really exceptional.”

Galindo said she hopes these efforts will lead to a sense of belonging that will help students feel more comfortable on campus.

“There are no mistakes,” she said. “Everyone who was admitted to UC Davis belongs at UC Davis.”